Many of us choose to share our lives with them. I, myself, have three! Let me introduce you to them: 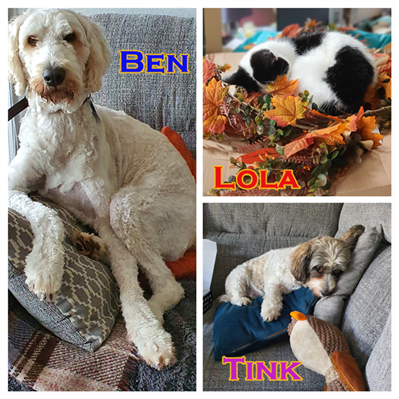 Ben is the latest addition to the family. We rescued him as an unsold and abused eight-month-old puppy last October. He’s responded well to our care and is my reliable partner on our daily walks. Everyone loves him, and doesn’t he know it!

Next, we have Lola. She came to us from a family member who found her son was allergic to cats... despite having two other cats. Yeah, I think she had just taken in one too many! Like Ben, she came to us young, less than a year old. Despite that, she is the boss, and while she’s had her nose put out a little by Ben’s affections (he doesn’t seem to understand why she doesn’t want to play with him), she still holds the high ground with impunity. Her desire to nap in random places, like the middle of our autumn wreath in her picture above, is the main topic of this little piece, so read on!

Last, but by no means least, we have Tinkerbell, or Tink as we know her (unless she’s being naughty, which is often—don’t let that picture fool you). She was my mother’s dog, and when Mum passed away four years ago, we took her in, as my father found her too painful a reminder of his wife of 39 years. She came to us after Lola, and before Ben came along, she was very much the bottom of the pile. Now she hides behind Ben, relishing in her newfound furry shield!

With the introductions over, allow me to continue, dear reader!

As we all know, 2020 has been an extremely challenging year. This is an understatement, of course! However, I’m luckier than most. As the principal consultant for Silverback Systems Services Ltd (or Silverback Systems, as it’s more commonly known), I do most of my work from my home office. Here I am, showing off my THWACKcamp 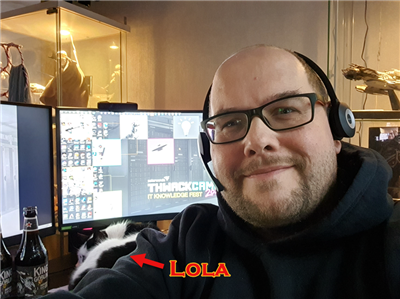 The enterprise monitoring arena has, if anything, become even busier this year, with companies scrambling to get a handle on how their office or data centre-based infrastructure is coping with so many of us working from home and nobody onsite to look after it!

So, for me, my work life hasn’t changed. In fact, we’ve had our most successful year! But working from home has its challenges. Sometimes, these challenges can become annoying—they can become our pet peeves, as it were! One furry companion causes me more consternation than the others. Can you guess which one?

Lola enjoys sleeping in random places. Like most cats, if she fits, she sits. Her favourite places have changed since Ben joined the family. His exuberant attention means she can no longer sleep in places where he can nuzzle her (he’s pushed her off the back of the sofa with his nose a few times—he doesn’t know how big he is), so she’s been looking for safer havens.

Unfortunately, she’s chosen the gap beneath my screens as her new favourite spot. Now, this wouldn’t be a problem if she simply lay down and slept. But she doesn’t.

She’ll sit there. In front of whatever I’m working on. If I reach out to move her, she thinks I’m playing, so she flops onto the desk, knocking whatever happens to be on it all over the place. My phone, my wireless mouse, my coffee… You name it, she’s either knocked it over or off of the desk! And the hair! OMG the HAIR! I feel some kinship with Anakin Skywalker, as it gets EVERYWHERE!

Then, when I’m moving the cursor between screens and she notices, she’ll sit up AND WATCH IT! She doesn’t try to attack it, just moves and gets her head and nose RIGHT WHERE I’M TRYING TO CLICK! I have to physically get up and look around her to do my work sometimes!

By the end of a workday, I must have picked her up a dozen times and moved her into the kitchen. There, she has other lofty perches from which to gaze down in triumph at Ben while he whines, not understanding why the small fluffy thing doesn’t want to play…

When it’s all said and done, it’s hard to stay cross at her. No damage has been done, she hasn’t knocked over a full cup of coffee (YET!), and my phone (and mouse) have survived the trips off the desk they’ve suffered at her affectionate flailing! And, let’s face it, when she’s dozing (and not in the way), she is adorable: 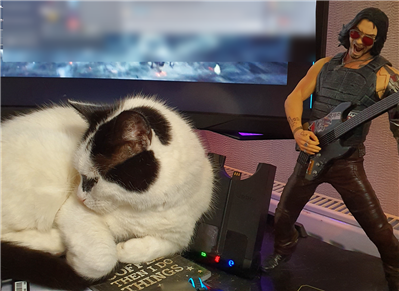