The Legacy of "Challenge Accepted" 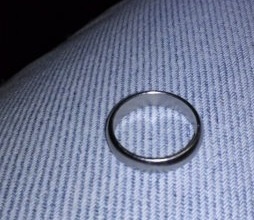 We just spent two days wrestling with this years’ THWACKcamp theme, and I think we’ve all come away much richer for the discussions held, the information shared, and the knowledge imparted.

And as I sit here in the airport lounge, tired but exhilarated and energized, an old post appeared on FB feed. It was written and posted by a friend of mine a few years ago, but came back up through serendipity, today of all days.

It tells the story of why this amazing woman who's been my friend since 7th grade chose the sciences as her life's path. And it starts with with a ring - one which was given 50 years late, but given never the less. And why the ring was actually secondary after all.

We lived near each other, played flute one chair apart in band, shared an interest in all things geeky including comic books and D&D, and when she got her license in high school we carpooled to HS together because we both suffered from needing to be “in place” FAR too early in the morning. Many a sleepy morning was spent sitting outside the band room, where I would test her on whatever chemistry quiz was upcoming. Even then her aspiration to be a a biologist was clear and firm, and she was driven to get every answer not only correct, but DOWN. Down pat. To this day whenever I call, I ask her the atomic weight of germanium (72.64, if you are curious).

She graduated a year before me, was accepted to the college of her choice, and from there easily attained all of her goals.

No small credit for this goes to the two women in her life: “Nanna” – her grandmother, who you can read about below; and her mother, a gifted chemical engineer with a long and illustrious career at BP, who was herself also inspired by Nanna.

When we talk about the energy behind the “challenge accepted” theme, this story really drives home a powerful set of lessons:

In simply getting up, facing the day, and proclaiming (whether in a bold roar to the heavens or a determined whisper to ourselves) “Challenge Accepted” we have the opportunity to light the way for generations to come.

It is a simple steel band. No engravings, nothing remarkable. It has always been on her right hand pinkie finger since she got it.

It was May in the summer of 1988. I had graduated with my bachelor degree in biology and was getting ready to start the Master's program at the University of Dayton. Nanna needed to get to Ada, Ohio and I needed to drop some stuff down at Dayton. We made a girl's weekend trip around Ohio.

We talked about traveling to college and how in her day it was all back roads; the interstate system that I was driving had not come about. I was speeding (young and in a hurry to go do things) and Nanna said, "Go faster." I made it from Eastside Cleveland to Dayton in record time. Dropped off the stuff with my friends and back on the road!

Made it to Ohio Northern in time to grab dinner in the dorm hall cafeteria, wander around a little bit until Nanna's knees had enough of that, then we settled into the dorm room for the night. I got the top bunk, she took the bottom. We talked and giggled like freshmen girls spending their first night at college.

The next morning we got dressed up, grabbed breakfast, then made our way to the lecture hall. The room was packed with kids my age and professors. The ceremony began. It was the honor society for engineers and the soon-to-graduate engineers were being honored. One by one, the new engineers were called to the front. Last of all the head of the society called out, "Jane Cedarquist!" Nanna smiled and, with a little more spring in her achy knees, went to the front of the hall.

"About 50 years ago, this young lady graduated with a degree in engineering. She was the first lady to do so from our college so we honor her today - an honor overdue." She got a standing ovation and a number of the young engineers that stood with her gave her hugs and shook her hands. After the quiet returned, the engineering students gave their pledge and received their rings of steel and placed them on their right hand pinkie fingers.

Jane Cedarquist went out into the world as an engineer and managed to survive trials and tribulations of being a woman in a man's world. Eventually she meet *** Harris and they married and had two kids. She stayed home because that's how things worked. Eventually her kids grew up and had kids of their own. She never got back to engineering, though some of the landscape projects and quilts she made had the obvious stamp of an engineer's handywork. She traveled around the world and marvelled at the wonders, both man-made and God-given. She loved jewlery and always had her earrings, necklace, bracelets, and rings on her person. All of them had meaning and value. Some pieces would come and go, but after that day in 1988 she was never seen without that ring of steel.

It is a simple steel band. No engravings, nothing remarkable. It has always been on her right hand pinkie finger since she got it - until now.

(Leon's footnote: Jane Cedarquist Harris passed away, and passed her ring to my friend. She wears it - on a chain, since she understands the gravity of the pledge her Nanna made - carrying the legacy forward both professionally and symbolically).