What I Saw at Cisco Live Las Vegas

Before I dig in to what I saw, as well as what I think about what I saw, I have to take a moment to shout out my gratitude and thanks to the amazing SolarWinds team that assembled for this convention. In fact, I had so much shouting to do that I wrote a whole separate post about it that you can read here. I hope you'll take a moment to share in the sheer joy of being part of this team.

But remember to come back here when you're done.

Okay, you're back now? Let's dive in!

CLUS is About Connections

As much as you may think Cisco Live is about networking (the IT kind), technology, trends, and techniques, the reality is that much of the attraction for a show like this is in making personal connections with groups of like-minded folks. While that's true of most conventions, Cisco Live, with 27,000 attendees this year, offers a larger quantity and wider variety of people with the same range of experience, focus, and background as you. You can sit at a table full of 33-year-old voice specialists who started off as Linux

server admins. It might be a bit of a trick to find them in the sea of humanity, 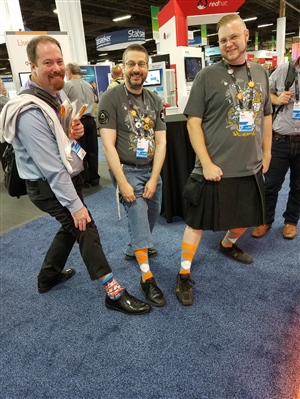 but they are there. Usually they are attending the same sessions you are; you just have to look around.

Beyond the birds-of-a-feather aspect, Cisco Live gives you a chance to gather with people who share your particular passion - whether it's for a brand, technology, or technique - and learn what's in store in the coming months.

And what would geek-based IT culture be if all of that social interaction didn't include some completely off-the-wall goofiness? An offhand joke last year blossomed into the full-fledged #KiltedMonday, with dozens (if not hundreds) of attendees sporting clan colors and unshaved legs to great effect.

Speaking of legs, many people's legs were also festooned with a riot of colors, as #SocksOfCLUS, also started to take hold. You might even say it got a leg up on the convention this year. (I'll be here all week, folks.)

The Rise of DevNet

During the show, news broke that cloud-based development environment Cloud9 had been acquired by Amazon Web Services

Next, @awscloud grabs @Cloud9. One day all will be #AWS and #Azure. Learn #DevOps fellow geeks.

Over the last three Cisco Live events I've attended, the growth of the area devoted to DevNet - the network engineer-flavored DevOps  - has grown substantially. It’s expanded from a booth or two at Cisco Live 2015, to a whole section of the floor in Berlin 2016, to a huge swath of non-vendor floor space last week. Two dozen workstations were arranged around a model train, and attendees were encouraged to figure out ways to code the environment to change the speed and direction of the train. Fun!

I found this much more engaging and effective than the other statements that network engineers need to learn to code due to the pressure of a SPECIFIC technology (say SDN). While it might be true, I much prefer that the code be presented FIRST, and then let IT pros figure out what cool things we want to do with it. 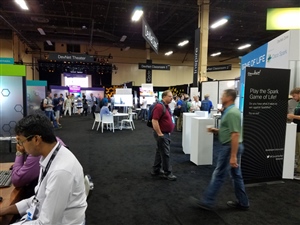 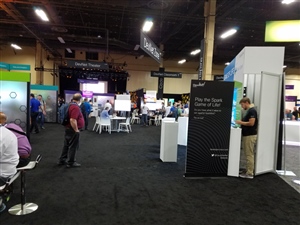 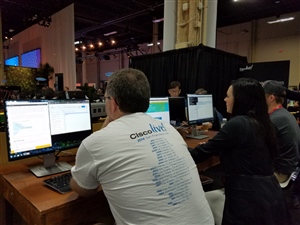 Still Figuring IT Out

It is clear that the convention is both emotionally and financially invested in the evolving trends of SDN, IoT, and cloud/hybrid IT. Vast swaths of the show floor are dedicated to it, and to showing off the various ways it might materialize in real, actual data centers and corporate networks.

But the fact is that none of those things are settled yet. Settling, perhaps. Which is fine. I don't need a convention (much less a single vendor) to announce, "And lo, it was good" about any technology that could change the landscape of infrastructures everywhere.

For things like SDN and IoT, Cisco Live is the place you go once a year to check in, see how the narrative has changed, and elbow the person next to you at the session or display and say, "So, are you doing anything with this? No? Me, neither.”

Back at Starship SolarWinds (aka our booth), the story was undeniably NetPath

. People sought us out to see it for themselves, or were sent by others (either back at the office or on the show floor) to come check it out. The entire staff demonstrated the belle of the NPM 12 ball constantly throughout the day, until the second day, when we had booth visitors start demo-ing it THEMSELVES to show OTHER visitors (who sometimes turned out to be people they didn't even know). The excitement about NetPath was that infectious.

We also witnessed several interactions where one visitor would assure another that the upgrade was painless. We know that hasn’t always been the case, but seeing customers brag to other customers told us that all of our due diligence on NPM 12, NCM 7.5, NTA 4.2, and SRM 6.3 (all of which came out at the beginning of June) was worth all the effort.

Not that this was the only conversation we had. The new monitoring for stacked switches was the feature many visitors didn't know they couldn't live without, but left texting their staff to schedule the upgrade for. The same goes for Network Insight - the AppStack-like view that gives a holistic perspective on load balancers like F5

s and the pools, pool members, and services they provide.

We also had a fair number of visitors who were eager to see how we could help them solve issues with automated topology mapping, methods for monitoring VDI environments, and techniques to manage the huge volume of trap and syslog that larger networks generate.

And, yes, those are all very network-centric tools, but this is Cisco Live, after all. That said, many of us did our fair share of showing off the server and application side of the house, including SAM, WPM, and the beauty that is the AppStack view.

Even more thrilling for the SolarWinds staff were the people who came back a second time, to tell us they had upgraded THAT NIGHT after visiting us and seeing the new features. They didn’t upgrade to fix bugs, either. They couldn’t live another minute without NetPath, Network Insight (F5 views), switch stack monitoring, NBAR2 support, binary config backup, and more.

We all took this as evidence that this was one of the best releases in SolarWinds history.

CLUS vs SWUG, the Battle Beneath the Deep

In the middle of all the pandemonium, several of us ran off to the Shark Reef to host our first ever mini-SWUG, a scaled-down version of the full-day event we've helped kick off in Columbus, Dallas, Seattle, Atlanta, and, of course, Austin.

Despite the shortened time frame, the group had a chance to get the behind-the-scenes story about NetPath from Chris O'Brien; to find out how to think outside the box when using SolarWinds tools from Destiny Bertucci (giving them a chance to give a hearty SWUG welcome to Destiny in her new role as SolarWinds Head Geek); and hear a detailed description of the impact NetPath has had in an actual corporate environment from guest speaker Chris Goode.

The SolarWinds staff welcomed the chance to have conversations in a space that didn't require top-of-our-lungs shouting, and to have some in-depth and often challenging conversations with folks that had more than a passing interest in monitoring.

And the attendees welcomed the chance to get the inside scoop on our new features, as well as throw out curveballs to the SolarWinds team and see if they could stump us.

Cisco Live was a whirlwind three days of faces, laughter, ah-ha moments, and (SRSLY!) the longest walk from my room to the show floor INSIDE THE SAME HOTEL that I have ever experienced. I returned home completely turned around and unprepared to get back to work.

Which I do not regret even a little. I met so many amazing people, including grizzled veterans who’d earned their healthy skepticism, newcomers who were blown away by what SolarWinds (and the convention) had to offer, and the faces behind the twitter personas who have, over time, become legitimate friends and colleagues. All of that was worth every minute of sleep I lost while I was there.

But despite the hashtag above, of course I have regrets. Nobody can be everywhere at once, and a show like Cisco Live practically requires attendees to achieve a quantum state to catch everything they want to see.

Some of these regrets I plan to resolve in the future. Others may be an unavoidable result of my lack of mutant super-powers allowing me to split myself into multiple copies. Which is regrettable, but Nightcrawler was always my favorite X-Man, anyway.

Even before we departed, several of us were talking about what we intended to do at (or before) Cisco Live 2017. Top of the list for several of us was to be ready to sit for at least one certification exam at Cisco Live.

Of course, right after that our top goal was to learn how to pace ourselves at the next show.

Somehow I think one of those goals isn't going to make it.