SD-WAN: What NPM Does Now

SD-WAN is designed precisely to address the types of challenges network operators now face, so we expect to see a significant uplift in adoption. The WFH-migration and ensuing traffic pattern changes have had major impacts on our end users. Fortunately, Network Performance Monitor (NPM) already has the functionality to help inform an SD-WAN transition, and monitor the Interface Statistics for the top 3 most common SD-WAN vendor devices – Cisco Meraki, Cisco Viptela, and VMware VeloCloud. (1)

What We Do Now: Interface Statistics

Downtime information is helpful in several ways. It enables SLA-bound providers to report accurate service availability. It enables in-house network techs to identify and troubleshoot service outages. It can even enable CIOs to make more intelligent investment decisions for the enterprise. The health of interfaces has been available in the Health Summary widget since NPM 12.3. As of NPM 2020.2, we have thoroughly tested native interface statistics support for the following device families:

Although your desired vendor may not be on the list, if it supports standard SNMP MIBs that we monitor, then it’s likely already supported as well.

To access Interface Statistics, log in to the Orion Web Console and navigate to the Node Details view of a relevant node. Review the Interface Downtime widget. By default, this widget shows the interface status for the last 24 hours, each hour represented as a block in color. This widget is also available on Interface Details views. To see a detailed view of a problematic section, position your cursor on the graph.

By default, the Interface Downtime widget displays downtime data for the last 24 hours, one block representing 1 hour. You can display any time frame within the stored history by editing the widget and selecting Custom in the Downtime Period list. The historical perspective available is impacted by the retention settings of the polling engine.

What We Do Now: Interface Health

From the Node Details view, you can also see a Health Summary widget which displays an overview of the status of interfaces on the node.

Clicking on a status group number will take you to the Interfaces subview, filtered by the selected group status. The Interfaces subview lists monitored interfaces on the device chosen, including relevant details such as in and out utilization or any errors in the last hour. 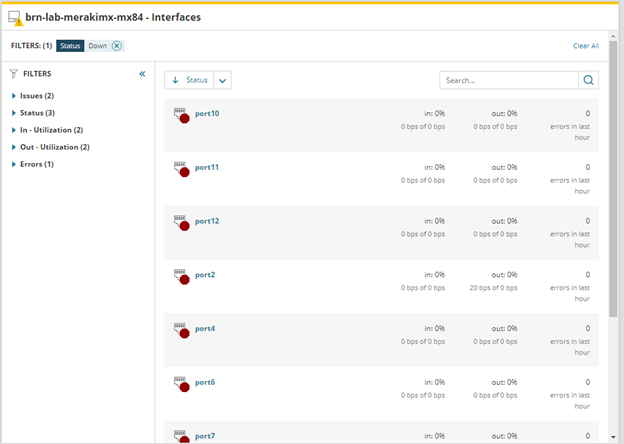 A summary of this information is also available in the Current Percent Utilization of Each Interface widget on the node details page. 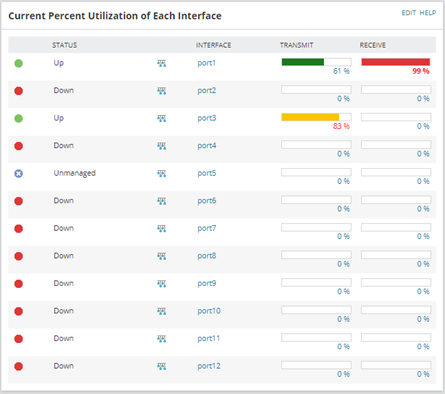 What We Do Now: Node Details 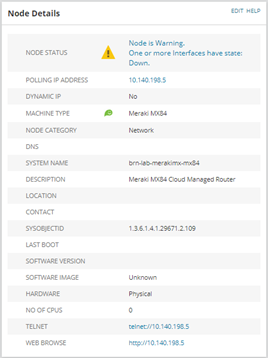 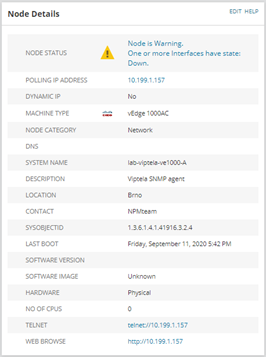 It’s important to note that VeloCloud devices are  (as of NPM 2020.2) identified as “net-snmp-Linux" machines during node discovery. Labeling VeloCloud by brand name is something that what we’re working on.

Though the machine type doesn’t populate with the VeloCloud machine type, Interface Health and Statistics values have been thoroughly tested and function correctly for this  SD-WAN vendor.

What We Do Now: Meraki Dashboard

NPM is now on the Meraki marketplace, along with NTA, and offers API integration with the Meraki Dashboard (although this is currently limited to wireless support).

What We Do Now: NetPath

NPM’s NetPath feature is extremely helpful for troubleshooting performance issues. Increasingly complex environments require more robust tools. NetPath can measure the performance of remote systems serviced by SD-WAN edges, to monitor connectivity from your users to the services they care about. By determining the infrastructure in the path from user to service, technicians can see where traffic slowdowns are occurring. NetPath provides visual, hop-by-hop analysis along critical network paths to provide enhanced quality of service for end-users in an SD-WAN environment.

What We Do Now: PerfStack

The Orion Platform’s PerfStack feature allows customers to compare the interface statistics from SD-WAN vEdges alongside other disparate data types. Without the ability to visualize performance metrics on a correlated timeline to make analyzing data patterns much easier. For example, if an end user's system is presenting application performance issues, PerfStack can visually correlate vEdge bandwidth utilization against system memory and CPU utilization to determine which of the 3 are contributing to the issue.