Why aren’t we using Containers, and other questions CIOs ask when coming back from a tech conference

Sitting back at the office getting work done, keeping the ship afloat, living the Ops life of the perception of DevOps, only to have your IT Director, VP or CxO come and demand, “Why aren’t we using Containers! It’s all the rage at FillInTheBlankCon!” And they start spouting off the Container of the week, Kubernetes, Mesos, Docker, CoreOS, Rocket, Photon, Marathon, and another endless Container product, accessory or component of a container.   If it hasn’t happened to you, that may be a future you’ll be looking at.  If it has happened to you, or you’ve already adopted some approach to Containers in your environment even more the better.

Just as a VERY brief primer in the infinite world of containers for those of you who are not aware I’ll try to overly simplify it here.  Using the following image as an example and comparing it to Virtualization. Typically, Virtualization is hardware running a hypervisor to which you abstract of the hardware and install an Operating System on the VM and then install your applications into that. Whereas in most container scenarios you have hardware, running some kind of abstraction layer which you present Containers where you install your applications, abstracting out the Operating System.

So quite possibly the most overly simplified version of it because there are MANY moving parts under the covers to make this a reality and make it possible.  However, who cares how it works as much as how you can use it to improve your environment, right?!

That’s kind of the key of things, Docker one of the more commonly known Container approaches (albeit technically Kubernetes is used more) has some real cool benefits and features of it. Docker officially has support for running Docker Containers on Microsoft Servers, Azure and AWS, and they also released Docker for Windows clients and OSX!   One particular benefit there that I like as a VMware user is PowerCLI Core is now available on Docker Hub!

But they don’t really care about how you’re going to use it, because all roads lead to DevOps and how you’re supposed to implement things to make their lives better. But in the event that you will be forced down a road of learning a particular Container approach for better or worse it’s probably best to find a way to make it better your life rather than just another piece of infrastructure we’re expected to understand even if we don’t.   I’m not saying that one Container is better than another, I’ll leave that up to you guys to make that particular determination in the comments if you have Container stories to share.   Though I’m particular to Kubernetes when it comes to running cloud services on Google, but then I really like Docker when it comes to running Docker for OSX (because I run OSX

The applications are endless and continually growing and the solutions are plentiful, some might say far too plentiful depending.   What are some of the experiences you’ve had with containers, the good the bad and the ugly, or is it an entirely new road you’re looking at pursuing but haven’t yet?  We’re definitely in the no judgement zone!

As always I appreciate your insight into how ya’ll use these technologies to better yourselves and your organizations as we all grow together!

There are days when I wish top administration and bottom access users could be prevented from being exposed to new technologies and new ideas.  Simply from the fact that sometimes they rush to adopt things that are not compatible with our present security requirements, or infrastructure designs, or servers / apps environments, etc.

Worse is when they buy these technologies without coordinating with SysAdmins, Security, Network, etc.

i refer them to various Dilbert comics...

I'm more of a Bill the Cat "ACK" kind of person, but Dilbert will do!

A dark cloud is forming.  It's time to get the umbrellas out as a rain storm is coming.

This spiraled out of control pretty fast!!!

Being in the medical field we tend to move slower then the rest of industry. We are still in the virtualization craze right now for our data center. 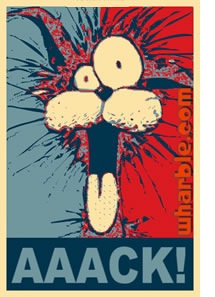 yeah, but it's so great!

Bloom County was a favorite of mine.  Although Bill The Cat never held my interest.

Was?   Did you know he's publishing again?  Mainly on Facebook, but a bit on Instagram.  Good stuff!

I was a bigger Opus fan than anything, or Rosebud.  But I figure the "Ack" is a better response to those asking for new technologies.  Although if I could manage what Opus did to the Hare Krishna that could work too, but I doubt I could pull that off...

This looks like a daily conversation between me and our Windows folks.  Always interpreting what they want.

Two weeks ago the buzzword was 'Hadoop' and how we were going to create a big data lake, which dried up into a puddle then into just a teardrop once the higher ups got the pricetag

wow, here I thought I didn't have any tears left to cry...

I heard the term hadoop here....we shall see.

Containers...in many ways seem to be mini systems (virtual) that just run one app without all the mayhem of a full OS implementation, but them I haven't looked into it much.

I will start by pointing out that I have no practical experience with containers, only what I have read.  With that being said, I have heard many people say that containers will change the industry just as significantly as virtualization did.  From what I have read I am not sure I agree with that.  I still think there is a very distinct possibility that containers will continue to be a use-case based solution.  To me the problem that virtualization solved was very clear; that isn't so much the case with containers.  Also I find that too much abstraction can lead to other problems.

With that being said I certainly expect containers to impact the industry and my role in it, just not necessarily as much as some people are touting.

Medical applications move at the speed of sloth. I feel your pain.

Actually I think it will take off in a huge way. The entire process of creating code - develop - test - implement into production will all be virtualized. Since each container is just a stamped out replica

you can add/delete them as needed and additionally you can limit the amount of time a container exists.

We have medical applications that have to take the entire infrastructure through FDA certification. It can take years. It was only in the last few years that the FDA put in writing that systems that have Security patches (so anything on windows or SQL) can apply patches to these systems. We have patched things against the vendors "requirements" for years. I actually agree that some things in medical apps will drastically change, but there are significant challenges.

Anything that involves the FDA you might as well just stick your head in the ground. Around here the FDA stands for Forget Doing Anything.

The whole 'container' subject is very interesting to me and I'm still trying to get the concept of how I am going to be able to monitor these.

I'm looking at these in a Linux environment and its just a bare minimum kernel with the application code running on it. There is no more

full blown OS to monitor, nor will there exist a dedicated machine or IP. Just the container and it can be set to only 'live' for a set amount of time.

It's going to get interesting!

Upper management wants some new tech because they heard a bunch of cool buzz words from an enthusiastic speaker at a con.  They don't understand how it works or why they need it but you better get it figured out NOW NOW NOW! *facepalm*

thanks for the article