Last week we discussed whether automation is expected in today’s IT environment. Many of you agreed that it’s definitely not a new thing, with SysAdmins scripting things years ago (hello, Kix32!). We could even argue that it was much easier to script things in the old days when DOS and Windows 3.1 relied on .ini files for configuration, and there was no pesky registry.

Like other technology buzzwords, automation may prompt a different mental picture for you than it does for me. To online entrepreneurs, automation is about lead magnets feeding into sales funnels, auto responders and content delivery systems – that’s the magic behind the “make money while you sleep” crowd (or so they say). To a manufacturer, automation might mean robotics. To a customer services manager, automation can be customer support self-service or chatbots.

So let’s discuss what SysAdmins are actually automating.

Builds – Gone are the days of inserting 6 x 3.5” disks to install an operating system, or being able to copy it from one machine to another (totally showing my age here). After that, you were lucky if someone had taken screenshots or written down what settings to select as you stepped through the setup screens of NT4.0. We’ve always wanted our server and desktop builds to be consistent, but the need to document got in the way for some of us. Microsoft Small Business Server gave us wizards, and image cloning technology and Sysprep became normal for desktops. Ignoring cloud services for now, how are your current server and desktop builds automated? Have you gone fully "Infrastructure as Code" with Puppet, Chef, or Ansible?

Standard desktop settings – After a while in the small business space your memory fades of locked down Standard Operating Environments, but the reasons for them remain strong. In a Microsoft world, it seems Group Policy settings still rule here. Am I right?

Server reboots and service restarts – While I’d love to see us progress further with autonomous computing (computer, heal thyself), we’re not quite there yet. In reality, you can have a few workhorse servers that just need a scheduled reboot every now and again. My other favorite remediation step is automatically starting services that shouldn’t have stopped. What automation do you have in place to prevent things from dying or for trying to revive them?

User provisioning – When used for the occasional staff member, the GUI isn’t that bad a place to create new accounts, as long as you remember to add the required group memberships, mailboxes etc. Even then, it’s probably quicker to update their details on a spreadsheet and run a PowerShell command. Has PowerShell become our new favorite thing for user adds, changes, and deletes?

This is a very brief overview, so what have I missed? Do you live on GitHub, searching for new scripts?

Jump into the comments and share what SysAdmin tasks you’ve automated and how. Maybe together we can automate us out of some work!

PowerShell Desired State Configuration (DSC), is probably worth a mention for both the builds and the "computer, heal thyself", especially at scale. I've used it to automate test builds in azure for example.

Of course, even if there isn't some functionality out of the box that you want to script, you can always build your own tools as well

Write-Host "Hello World!" - Or how to build tools with PowerShell 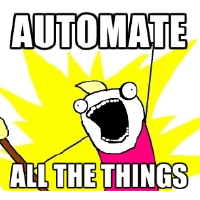 Automation enables us to get more things done with our understaffed departments.  Network Configuration Manager is a perfect tool that lets me accomplish many more critical tasks than I could do on my own:

Purchasing NCM and NPM as automated tools to do these things is a no-brainer.

Group Policy is the only way to go on large Windows environments from my experience.  I'm finding using SCCM instead of just WSUS alone is also helping keep windows systems patched as you can force the patching process instead of letting users just keep putting off patching.  I haven't tried SW Patch Manager but it also seems to be a good solution.  I've got most other SW products though.

As a long-time *nix user, I still find myself using perl and python quite often to automate things in windows. Powershell is something I find myself using more often, but I'm still more familiar with those other tools. While it's more for macros than true automation, I use AutoHotKey to reduce keystrokes for tasks I perform manually often.

How about IPSoft -> IPC ? www.ipsoft.com

If you are in AWS world, you could give "Service Catalog" - Service provisioning a shot. It is pretty cool.

I don't really do any scripting but your bit about pc builds took me back to building XT's with 20mb hard drive and mono screens. There were 3 x 5.25 discs for Dos 3.2

That sounds awesome. Gone are the days when networking troubleshooting meant a trip to the patch panel with your Fluke (though that still has its place). Software defined networking rocks too.

I have a soft spot for Group Policy. It's been around for a while now but it still keeps ticking along, doing what it does well, especially as Microsoft keep extending it to support the newest OSes etc.

Glad you liked it - thanks for commenting.

AutoHotKey sounds like a smart move.  And I totally get your point about using the tools you are more familiar with.

Oh wow. Reminds me of this post about AI: Hey Siri, fix my PC.

What if I told you my first IT job was learning how a config.sys and autoexec.bat loaded drivers for an external 'backpack' hard disk (plugged in via parallel cable), then loaded DOS so I could run xcopy to image a new PC?  Those were the days!

Sounds fancy! I had to build the pc's all from 5.25" floppy disks. I also remember charging customer $200 extra if they wanted a 40Mb hard drive instead of the 20Mb the pc came with

With all of the monitoring and automation available to today's SysAdmin, it still makes me scratch my head when I begin a a new company and see people performing repeated manual tasks across thousands of devices. Thank you for the observations regarding Automation.

I see it as well as every company is at a different stage of the life cycle.