Parity. While the word means many different things, I think that in the world of infrastructure, we tend to lean towards the idea of parity within storage. (Insert seriously interesting read here.) For this post though, I want to branch out a bit and move into a realm of software/DevOps/automation engineering. Let’s start with some, very simplified, definitions:

Example: The Orion Platform maintains feature parity across all products within the reporting and alerting engines. While there are multiple modules that focus on varied monitoring disciplines, all access web reports and alerts in the same way.

Functional Parity: The ability to maintain a common end-result between multiple systems, regardless of features used to achieve the result.

Example: SolarWinds Server & Application Monitor (SAM) and Log & Event Manager (LEM) both have the capabilities to monitor, report, and alert on specific Windows Events. However, their individual approaches to those functions vary greatly.

Now, let’s get further down this rabbit hole and apply these definitions of parity to our careers.

A few weeks ago, I was blessed with the ability to attend THWACKcamp 2017 with a group of my peers and fellow THWACK MVPs. During “camp,” we spent a LOT of time socializing with each other and sharing backgrounds, passions, hobbies, and Limoncellos with Crab Cakes. One thing that really struck me was the vast array of paths that each MVP took to get where they are today. Off the top of my head, I can remember several small-business owners/consultants, infrastructure architects, way too many network engineers (where are all the DBAs and DevOps pros???), a few dreaded infosec professionals, several monitoring engineers, lots of jack-of-all-trades engineers, and two current SolarWinds employees. However, despite all of the titles we each hold individually, we all hold the MVP title collectively.

I think the singular thread that tied all of the MVPs together at camp was the urge/need to constantly improve our skills mixed with a healthy level of self-deprecation that keeps us motivated to spend those personal hours getting better and better. What’s interesting is that in our sample group, there was a mixed amount of Feature Parity for backgrounds, but almost 100% Functional Parity as to where we are right now. And I think we can take this further and expand that to the entirety of the THWACK community (all 130,000+ of us). To me, one of the absolute BEST parts of being involved in the SolarWinds software suite is the community, and I am constantly in awe at the knowledge, innovation, and selflessness that I find in these “hallowed halls.”

What do you think? Does one type of parity (Feature/Functional) outweigh the pathway of your career and ultimate goal(s), or would it be a symbiotic relationship between the two? Or maybe you think this is all hogwash and you can share your opinions on whatever version of parity that you want!

I went straight to hard drive parity.   Many of my systems place high I/O demands on the servers.  RAID 10 is a pricey but effective solution to the need.

A RAID 10 configuration requires a minimum of four disks, and stripes data across mirrored pairs. As long as one disk in each mirrored pair is functional, data can be retrieved. If two disks in the same mirrored pair fail, all data will be lost because there is no parity in the striped sets.

RAID 10 provides redundancy and performance, and is the best option for I/O-intensive applications. One disadvantage is that only 50% of the total raw capacity of the drives is usable due to mirroring.

T'was the night after Thwack Camp 2017 and all of the MVP that gathered for dinner at Rocco's were asked questions by Rocco, the restaurant owner.

So you all work for the same company?

No, we all work for different companies.

Do you all work in the same industry?

No, we work for many different industries, Finance, Concrete Production, Liqueur Distribution, Education and many others.

By this time Rocco was puzzled and wondered what brought this group together.

We explained that use software from SolarWinds to monitor our systems.  Every one of us uses the software in unique ways that fit our needs.

As an example, we said to Rocco, "You have freezers and refrigerators and if one got warm in the middle of the night, how would you know?"  "You can set up sensors and use this software to alert you to a potential loss of food needed to run your business.  You can also use it to make sure your Point of Sale systems are ready to go for the day and alert you if transactions are not going through."

My mind also went instantly to parity bits. I'm still amazed at how we can maintain data operations in a RAID array with a failed drive (or drives depending on RAID configuration).

What a wonderful life it would be if we were all living in a parity world.

Everyone should have a Rocco in their life. He was so much fun.

Former NFL Commissioner Pete Rozelle said that he wanted every team to go 8-8 in a season and for the league to have parity. Instead, what he had was the dynasties of the 1960's Green Bay Packers, 1970's Pittsburgh Steelers, and so on.

Pete felt parity was good for the league. Every team was competitive, had a shot for the playoffs, made all games meaningful. Parity would equate to enormous revenue growth. The reality is that the league experienced exponential growth and prosperity during Rozelle's reign without parity being achieved.

Most times, there is a little or no parity between who we are online and we are in person. I hear there is a word for it now: textrovert. 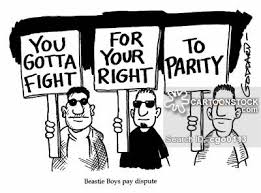 Parity: that which is measured for similar attributes in a comparison.

The only other related word I can think of is from golf, being par for course. Both of these are, broadly speaking, the same; you look at what you have and see that it matches what you expect. Thus we have RAID parity.

Parity, makes me think of equity. Not everything equal or the same put a fair distribution.

Parity , in storage or communications was always a caluated value that helps you recover from errors.

Parity makes me remember the days of RAM parity.   Of course there is RAID as was mentioned and i think in life there is also parity.  I think its important to recognize the times when things are equal and work best that way.   Lets say a marriage.   Its very important to have parity in a marriage for sustained happiness and success.

All too often the word equal or equality is thrown about without complete thought.

Do we really want equality or parity? Take a look at this definition.

: the property of an integer with respect to being odd or even

A true balance is found when the value, purpose, use, etc. of any person or thing is truly understood. I like to use this example.

Do you want a cake made with equality?

Since RAID and RAM parity have already been mentioned I'll go another route. Parity made me think of Parody which is very different but a large part of my childhood growing up listening to Weird Al Yankovic and Dr Demento. Me and my friends would try to come up with our own parody songs but most of them were just plain terrible. Ah, good times.

If you have more than one child, isn't it interesting to see them look for parity under the Christmas tree or birthdays, or in everyday life?

Parity in IT is something that is a very delicate balancing act. The advantage of a single pane of glass for multiple systems to show you information is incredibly useful. But at the same time when you use that single point you may lose functionality or detail. In the end it really use like a tug of war in the battle for parity of features and functions.

When Rocco first talked about riding a horse I still imagined he was going to reference something like a miniature pony. lol. Don't tell him

zackm​ has a powerful definition of what makes an MVP, but I also like the nod to the community at large who really does make this what it is.

I think of functionality parity as....almost like a collective intelligence. I've never really thought of defining it, maybe because aside from the MVP group it seemed so rare to really encounter a group that was so strongly within the same mindset. I don't really know how else to explain that. Maybe it's just that we had so much fun that we really got to engage in everything with great experiences.

of course the MVPs tried to sell Rocco on monitoring his refrigeration units...

thanks for the fun read!

I have two nephews, 11 and 12. They basically have to get the exact same thing for cChristmas or there is trouble.

The link you provided is unavailable to me at work.  Would you mind sharing its content/topic or a screen shot of it?

The disk parity has been calculated. What other parity values do you know of?

Its a game of parity.

Wow, I clicked that many definitions link. I expected a couple of different things, not a list. Down the rabbit hole I go!

When I think of Parity I think of Symmetry and the fact that nature creates symmetry.  We have gone out of our way to create a similiar symmetry in computers.  Did we do this on our own or was this symmetry that we created an underlying force of nature within us?

Lately parity has me thinking about an audit server that has a predictive drive failure alert on one drive in a four drive array... ugh I can't risk another one failing so I'm racing to get the SAS disk replaced!