You find yourself with a multitude of clues.  Use your instincts and your plethora of tools to understand the means behind this atrocious crime.  This is the worst crime of all.  The epitome of treachery.  What crime you may ask?  Theft of productivity.

Comb through the clues and look deep into the bowels of your infrastructure.  Avoid the red herrings and get down to the actual root cause.  Detectives are only as good as their mind and tools, so use them both to find the culprit in “The Case of the Curious Systems Meltdown.”

Use the mission’s resources to complete the tasks and answer the questions for a chance to win!

Correctly answer each question during the week and you'll be entered for a chance to win the weekly prize.

Correctly answer all 20 questions over the course of the month and you'll be entered for a chance to win the grand prize.

150 points are being awarded for each correctly answered question. There are 20 questions, which means you can earn a maximum of 3,000 points for this mission.

Want to join the mission, but not a member? Sign up FREE now!

The shortcut is simple:

Looking forward to another exciting mission this month!

Yay! It's working. I can see the questions!

I feel like if you select Dark theme for Question 1 it should be worth some THWACK points.

"The game is afoot" is more appropriate.

My favorite quote from Holmes has got to be:

"When you have eliminated the impossible, whatever remains - however improbable - must be the truth!"

I don't know why but that makes total and complete sense to me...I must have a seriously warped mind!

And, BTW, some excellent prizes this month!  Can I 3-D print a trip to Hawai'i?  This cold is for the bloody birds!!

I want to believe that someday Dark Theme will be the correct answer!!!

Thought the Dark Theme option was a serious tease...maybe that means it may get some traction in the near future.

Hey, Jfrazier​, have you seen this thread:Dark Theme In a Day ?

3d printer be great for some projects i got coming up\

Occam's Razor is a good tool for troubleshooting network issues.

But if you want your mind blown, read "Occam's Scalpel" by Theodore Sturgeon.  You might come away with a different set of questions . . .

Yes, that was just a mean tease!

The Holmes quote is perfect for the I.T. world

This seems like it will be a fun mission this month.

Huh...? I selected "Dark Theme" from question 1 and got it wrong.

Have you seen this yet? Dark Theme In a Day​

Awesome prizes this month!  Was really pulling for #darktheme​  on the first question, but I resisted.

I don't know if this matters or not but, when linking to the Amazon products could you link to https://smile.amazon.com?

DarkTheme for the win!

I had the exact same thoughts!

That's a great suggestion! We'll keep it in mind when we purchase prizes.

I know I am getting old and grumpy but I just answered today's question (correctly for a change!) and thought the response a bit patronising. Is it me or what?

Do we ignore the spelling mistake (or incorrect wording) in today's answers.

Yeah, maybe a bit in the tone.

meh; sarcasm is The Admin's sharpest weapon; careful ye not be sliced

Sarcasm, isn't that the language of IT?

While I agree with you, davej​, that the tone of the response was a bit on the sardoinc side, is there an alternative way of looking at this?

Yes, one can say "Boy, that is a really sarcastic comment."...orrrrrrr

One can say that whoever wrote the question was simply indicating where, on the page, we can find the answers to some of the questions in the future.

I know it's easy to go to the negative ("It's easier for a human being to think negatively than positively; that's why only five percent are successful." - Earl Nightingale, "The Strangest Secret"), and we know that misery loves company. But judging by some things that have been mentioned in other threads, THWACK is in the midst of some turmoil right now and I think we need to cut the GEEKS some slack.  Like I said, when you go negative, you'll get a ton of likes and replies of "Me, too!" as we have seen.  I'm just suggesting an alternative approach until things get back to "normal" (whatever THAT is! ;-).

I agree with all you wrote there about how easy it is to be negative and to cut the folks some slack. I back that 100%

It was written and meant to be light hearted with the expectation that all those who know me and some that don't to say that its is me that is old and grumpy!

All, please take it as it was intended, a bit of a banter point to help pass the time and not a big dig at our colleagues.

Forgive me, Dave, was certainly not trying to go overly literal.  It's just been my experience on this forum that the GEEKS get raked over the coals for the slightest misstep and while joking and fun are definitely welcome, folks can take it to the extreme (else why is there a comment below that has been hidden?).

One thing I do know is that I do not envy these GEEKS their tasks: trying to cater to 150,000+ OCD, nitpicky nerds (meant with all due respect and love, gang...I am one, too) can drive anyone up a wall.  And I might get a little defensive of them, yes, and I freely admit that but I want this forum to stick around, and while it would be unlikely that they would pull the plug due to comments made on the threads, that possibility does exist.  Just sayin'...

I may have thrown up in my mouth at Adobe Flash overhaul... 😛

Looking like this is going to be a fun monthly mission.

What a cruel, cruel joke that answer is! 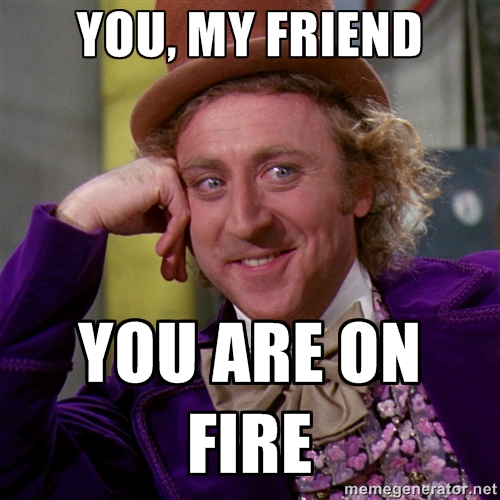 ok I got to admit being on fire today boost the moral a little bit.....

With all the back patting on correct answers this week... Well, I guess now I know what it feels like to be a millennial. Should they change the correct answers from green check-circles to gold stars or prize ribbons? Then the transformation would be complete.

I love this memes...

So far so good.....easy mission so far

Wow ... the passive-aggressiveness in the answer text is strong this month.

Graeme, I don't want to offend and I'll assume your query is one of "I don't know what that means. Please enlighten me." (although with all the "snarkasm" floating around the mission this month, my Spidey sense is totally off!) so here goes.

The term "Bada Bing" is an American colloquialism that stems from back East (New York, I'm sure) and has been attributed mainly to persons of Italian-American descent.  It means something akin to "Ah, yes, that was correct!" or "Yep, there it is! I see it now!".  It's often coupled with "Bada Boom" as well (so "Bada Boom, Bada Bing!").  Not sure where or when it started but it has appeared in modern film and television, and even in commercials here in the US.

Hope that helps and, as mentioned, that I do not offend.