Dameware® Remote Support is a complete support software solution designed to simplify remote access and troubleshooting of end-user computers (desktops, laptops, and servers) running Windows®, Linux®, and Mac® OS X® operating systems. Given the complexity of the solution, it’s certainly useful to focus on explaining a few key aspects of Dameware DRS that are the source of frequent questions.

In which modes Dameware can be deployed?

The centralized version of Dameware offers the Dameware Central Server, which you can use to manage Dameware licenses, Global Host Lists, and Dameware users. Dameware Remote Support centralized also enables you to initiate Internet Sessions to support remote end users outside your network.

The stand-alone version of Dameware doesn’t include the Central Server and does not support Internet Sessions with remote end users outside of your network.

What are the components of the product?

Dameware consists of the following components and applications: 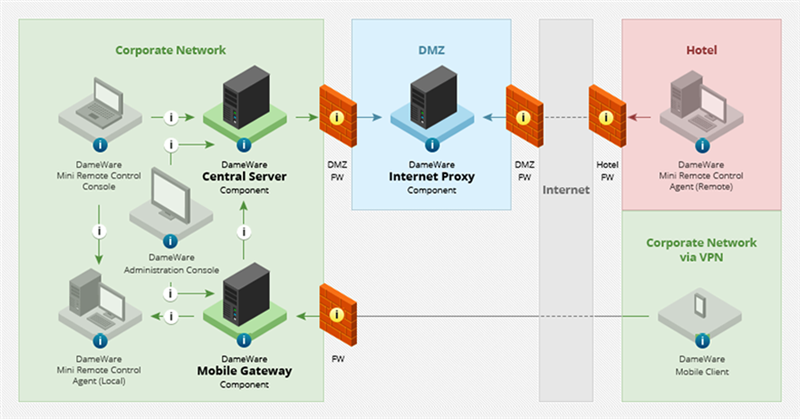 What types of sessions does Dameware support?

Dameware Mini Remote Control can be used to connect to a user internal to your network. The computer you’re connecting to must have the Dameware client service agent installed. The agent controls the communication between the technician's computer and the end user's computer. If the computer doesn’t have the agent installed, you’re prompted to install it when you try to connect.