Resources
Monitoring Central When Is SolarWinds ipMonitor Right for You

When Is SolarWinds ipMonitor Right for You 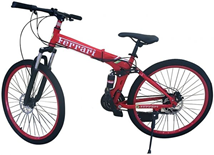 Did you ever dream you had a Ferrari

parked in your garage? How about a Porsche

? Or perhaps a finely engineered Mercedes-Benz

When I was eight years old, my father briefly flirted with the idea of buying a Ferrari. He was 38. I don't believe additional explanation is needed. However, as the oldest child, it was my privilege to accompany Dad to the showroom. And there, right next to the 308 GTB was a Ferrari bike. No, not a motorcycle. A regular pedal-with-your-feet bicycle. And I knew at that moment that this car was my destin... I mean my Dad's destiny. And that bike leaning beside it was mine, Mine, MINE!

You may be asking yourself why Ferrari would bother making a bicycle?

The obvious answer is "marketing." With a cheeky smile, Ferrari can say "anyone can own a Ferrari." But there's more to it.

Before I dive into the OTHER reason why, I just want to point out that car-manufacturer-bicycles is not just a thing with Ferrari. The trend started in the late 1800s with European car maker Opel

So what's the deal?

Some companies, like Opel, started with bicycles (they ACTUALLY started with sewing machines) and built up their mechanical expertise in sync with the rise of automobile technology. But most decided to build bikes as a side project. I imagine that the underlying message went something like this:

"Our engineers are the best in the world. They understand the complex interplay of materials, aerodynamics, maneuverability, and pure power. They are experts at squeezing every possible erg of forward thrust out of the smallest turn of the wheel. While we are used to operating on a much larger scale, we want to showcase how that knowledge and expertise translates to much more modest modes of conveyance. Whether you need to travel across the state or around the corner, we can help you get there."

I was thinking about that Ferrari bicycle, and the reasons it was built, as I played with ipMonitor

For some of you reading this, ipMonitor will be an old and trusted friend. It may even have been your first experience with SolarWinds

Some quick background: ipMonitor became part of the SolarWinds family in 2007 and has remained a beloved part of our lineup. ipMonitor is nimble, lightweight, and robust. A standalone product that installs on any laptop, server, or VM, ipMonitor can help you collect thousands of data points from network devices, servers, or applications. It's simple to learn, installs in minutes, and even comes with its own API and JSON-based query engine. Users tell us it quite literally blows the doors off the competition, and even reminds them of our more well-known network monitoring software like Network Performance Monitor (NPM) and Server & Application Monitor (SAM) server monitoring software.

Which is exactly why I remembered that Ferrari bicycle. It also was nimble, lightweight, and robust—a standalone product that could be implemented on any sidewalk, playground, or dirt path. It installed in minutes with nothing more than a wrench and a screwdriver, and epitomized the phrase "intuitive user interface."

And, like comparisons of ipMonitor to NPM, my beloved Ferrari bike was amazing until it came time to add new features or scale.

Much like the Ferrari bicycle, ipMonitor was designed by engineers who understood the complex interplay of code, polling cycles, data queries, and visualizations. Developers who were used to squeezing every ounce of compute out of the smallest cycle of a CPU. While used to creating solutions on a much larger scale, ipMonitor let us showcase how that knowledge and expertise translated to much more modest system requirements.

ipMonitor is designed to perform best in its correct context. For smaller environments with modest needs, when more feature-rich monitoring tools aren’t viable, it can be a game-changer. That Ferrari bicycle was an amazing piece of engineering—until I needed to bring home four bags of groceries or get to the other side of town. Likewise, ipMonitor is an amazing piece of engineering, but, as I said, in its correct context.

, or stacked switches; application monitors that run scripted actions in the language of your choice; monitoring for containers and cloud; and so on, that's where the line is drawn between ipMonitor and solutions like NPM and SAM. It's not that we've deliberately limited ipMonitor, any more than Ferrari "limited" their bicycle so that it didn't have cruise control or ABS breaking. Of course, this isn't an either-or proposition. No matter your monitoring needs, we've got a solution that fits your situation.

So, consider this your invitation to take ipMonitor for a spin. Even if you own our larger, luxury models, sometimes it's nice to get out and monitor with nothing but the feel of the SolarWinds in your hair.