Resources
Monitoring Central Benchmarking PHP Logging Frameworks: Which is Fastest and Most Reliable

Benchmarking PHP Logging Frameworks: Which is Fastest and Most Reliable

Our goals for the fastest PHP framework benchmark tests are to measure the time different frameworks require to process a large number of log messages, considering various logging handlers, as well as which logging frameworks are more reliable at their limits (dropping none or less messages).

The frameworks we tried are:

All of these frameworks use synchronous or “blocking” calls, as PHP functions typically do. The web server execution waits until the function/method call is finished in order to continue. As for the handlers: error_log, KLogger, Log4php, and Monolog can write log messages to text file, while error_log/syslog, Log4php, and Monolog are able to send the messages to the local system logger. Finally, only Log4php and Monolog allow remote Syslog connections.

NOTE: The term syslog can refer to various things. In this article, this includes the PHP function of the same name, the system logger daemon (e.g. syslogd), or a remote syslog server (i.e. rsyslog).

For this framework benchmark, we built a PHP CodeIgniter 3 web app with a controller for each logging mechanism. Controller methods echo the microtime difference before and after logging, which is useful for manual tests. Each controller method call has a loop that writes 10,000 INFO log messages in the case of file handlers (except error_log which can only produce E_ERROR), or 100,000 INFO messages to syslog. This helps us stress the logging system while not over-burdening the web server request handler.

NOTE: You may see the full app source code at https://github.com/jorgeorpinel/php-logging-benchmark

For the local handlers, first we tested writing to local files and kept track of the number of written logs in each test. We then tested the local system logger handler (which uses the /dev/log UNIX socket by default) and counted the number of logs syslogd wrote to /var/log/syslog.

As for the “remote” syslog server, we set up rsyslog on the system and configured it to accept both TCP and UDP logs, writing them to /var/log/messages. We recorded the number of logs there to determine whether any of them were dropped. We ran the application locally on Ubuntu with Apache (and mod-php). First, each Controller/method was “warmed up” by requesting that URL with curl, which ensures the PHP source is already precompiled when we run the actual framework benchmark tests. Then we used ApacheBench to stress test the local web app with 100 or 10 serial requests (file or syslog, respectively). For example:

The total number of log calls in each test was 1,000,000 (each method). We gathered performance statistics from the tool’s report for each Controller/method (refer to figure 1).

Please note in normal operations the actual drop rates should be much smaller, if any.

The “native” controller uses a couple of PHP built-in error handling functions. It has two methods: one that calls error_log, which is configured in php.ini to write to a file, and one that calls syslog to reach the system logger. Both functions are used with their default parameters.

By definition, no log messages can be lost by this method as long as the web server doesn’t fail. Its performance when writing to file will depend on the underlying file system and storage speed. Our test results:

NOTE: error_log can also be used to send messages to system log, among other message types.

Using error_log when error_log = syslog in php.ini, or simply using the syslog function, we can reach the system logger. This is similar to using the logger command in Linux.

This is typically the fastest logger, and syslogd is as robust as the web server or more, so no messages should be dropped (none were in our tests). Another advantage of the system logger is that it can be configured to write to a file and to forward logs via network.

KLogger is a “simple logging class for PHP” with its first stable release in 2104. It’s only able to write logs to file. Its simplicity helps its performance, however. KLogger is PSR-3 compliant: It implements the LoggerInterface.

NOTE: This GitHub fork of KLogger allows local syslog usage as well. We did not try it.

Log4php, first released in 2010, is one in the suite of loggers that Apache provides for several popular programming languages. Logging to file, it turns out to be a speedy contender, at least on Apache. Running the application on Apache probably helps the performance of Log4php. In local tests using PHP’s built-in server (php -S command), it was actually the slowest contender!

As for sending to syslog, it was actually our least performant option, but not by far:

Some of the advantages Log4php has, which may offset its lack of performance, are Java-like XML configuration files (same as other Apache loggers, such as the popular log4j), six logging destinations, and three message formats.

NOTE: Remote syslog over TCP however, doesn’t seem to be well supported at this time. We had to use the general-purpose LoggerAppenderSocket, which was really slow, so we only ran 100,000.

Monolog, like KLogger, is a PSR-3; and, like Log4php, a full logging framework that can send logs to files, sockets, email, databases, and various web services. It was first released in 2011.

Monolog features many integrations with popular PHP frameworks, making it a popular alternative. Monolog beat its competitor Log4php in our tests, but is still not the fastest PHP framework nor most reliable of options, although probably one of the easiest for web developers.

Now let’s take a look at graphs that summarize and compare all the results above. These charts show the tradeoff between using faster native or basic logging methods, more limited and lower level in nature vs. relatively less performant but full-featured frameworks: 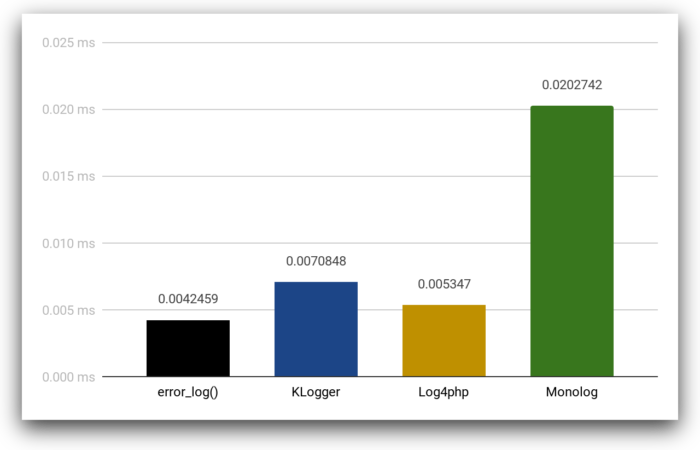 Log handler or “appender” names vary from framework to framework. For native PHP, we just use the syslog function (Klogger doesn’t support this); in Log4php, it’s a class called LoggerAppenderSyslog; and it’s called SyslogHandler in Monolog. 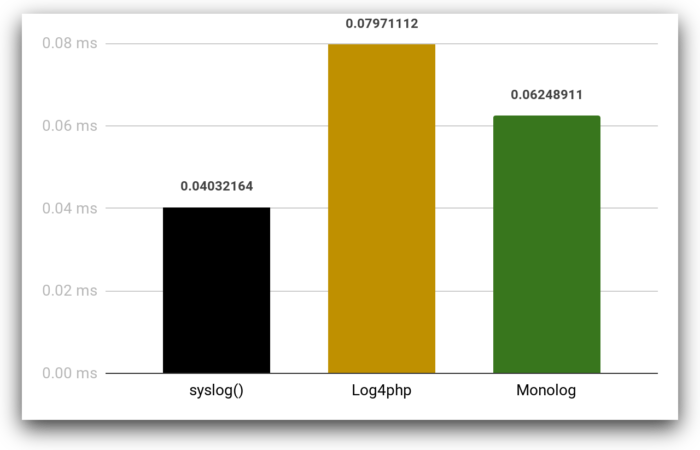 Fig 3. Time per message sent to syslogd via socket [ms/msg] To measure the drop rates, we leveraged the $RepeatedMsgReduction config param of rsyslog, which collapses identical messages into a single one and a second message with the count of further repetitions. In the case of Log4php, since the default message includes a timestamp that varies in every single log, we forwarded the logs to SolarWinds

Each logging framework is different, and while each could be best fit to specific projects, our recommendations are as follows. Nothing beats the performance of native syslog for system admins who know their way around syslogd or syslog-ng daemons, or to forward logs to a cloud service such as Loggly. If what’s needed is a simple, yet powerful way to log locally to files, KLogger offers PSR-3 compliance and is almost as fast as native error_log, although Log4php does seem to edge it out when the app is running on Apache. For a more complete framework, Monolog seems to be the more well-rounded option, particularly when considering remote logging via TCP/IP.

After deciding on a logging framework, your next big decision is choosing a log management solution. Loggly provides unified log analysis and monitoring for all your servers in a single place. You can configure your PHP servers to forward syslog to Loggly or simply use Monolog’s LogglyHandler, which is easy to set up in your app’s code. Try Loggly for free and take control over your PHP application logs.