Some of you are still in an office. I’m not ignoring you, but I think this question is already answered for you. So, this is what I look like 99% of the time at work. Like many of you my short-term work from home became permanent. I might block my camera and set this to the background and see who notices I don’t move. Are you thinking about my pants? It seems unlikely. 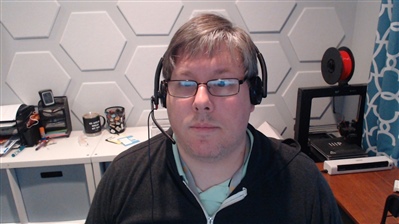 I don’t care if you wear sweatpants. Or shorts. Or whatever else that makes you happy, assuming you don’t stand up. But should we call sweatpants business attire? No, we shouldn’t. Whatever standard you had in an office, it’s still your standard. Do you need to follow it? It depends. First, you do make an impression, and all you have is a little box. Should I have brushed my shaggy hair before getting on the meeting? Shaved? Fixed my collar or take off the sweatshirt? Hidden my space with a background or cleaned up a bit?

Probably. And sometimes I do. Most of my face to face work is with my teammates. They know during COVID-19 lockdowns this winter, I’m likely to have a first grader next to me doing school. They do, too. I’ve never been the most stylish, so bad hair or a disheveled appearance isn’t surprising for me. But when I branch out, meet with new people, or other teams, I do make a bit more effort. I know they only have a few minutes and a small picture to learn anything about me. I want to make sure they know I can do what I’m promising.

One more thing before I go, if you’re wearing sweatpants, that’s fine. If you’re wearing them tomorrow, that’s fine. But make sure you’re taking care of yourself. Show yourself respect, treat yourself well. If you’re having trouble and you don’t have the energy to put other pants on, maybe give up on the little details that don’t matter so much. Make sure it’s not something that’s part of a bigger problem. And make sure the people you see in the little window are doing OK, too. Some of us aren’t doing OK. And it’s good to reach to others, both if you need to, and if you think they might need it. We’re all going through stuff. Don’t hesitate to find somebody, even if you don’t know how they’ll react. And if you need to talk to a random guy writing about sweatpants on the internet, I promise he’ll listen.