Resources
Geek Speak Why is This Monitor Different From All Other Monitors?

Why is This Monitor Different From All Other Monitors?

I was off last week to celebrate Pesach / Passover so I thought it would be a good time to offer you a taste of an upcoming eBook I'm working on, "The Four Questions of Monitoring," which uses that holiday both as its inspiration and as a thematic framework. I'll be publishing snippets of it here and there. 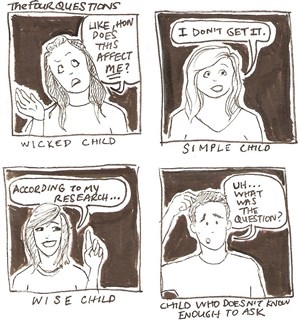 Once a year, Jews around the world gather together to celebrate Pesach (also known as "Passover,” "The Feast of Matzah,” or even "The Feast of the Paschal Lamb”). More a ceremonial meal than actual "feast,” this gathering of family and friends can last until the wee hours of the morning. The dinnertime dialogue follows a prescribed order (or "seder,” which actually means "order" in Hebrew) that runs the gamut from leader-led prayers to storytelling to group singalongs to question-and-answer sessions and even—in some households—a dramatized retelling of the exodus narrative replete with jumping rubber frogs, ping-pong ball hail stones, and wild animal masks.

At the heart of it all, the Seder is designed to do exactly one thing: to get the people at the table to ask questions. Questions like, "Why do we do that? What does this mean? Where did this tradition come from?" To emphasize: the Seder is not meant to answer questions, but rather provoke them.

As a religion, Judaism seems to love questions as much (or more) than the explanations, debates, and discussions they lead to. I'm fond of telling co-workers that the answer to any question about Judaism begins with the words, "Well, that depends..." and ends two hours later when you have three more questions than when you started.

The fact that I grew up in an environment with such fondness for questions may be what led me to pursue a career in IT, and to specialize in monitoring. More on that in a bit.

But the ability to ask questions is nothing by itself. An old proverb says, "One fool can ask more questions than seven wise men can answer." And that brings me back to the Pesach Seder. Near the start of the Seder meal, the youngest person at the table is invited to ask the Four Questions. They begin with question, "Why is this night different from all other nights?" The conversation proceeds to observe some of the ways that the Pesach meal has taken a normal mealtime practice and changed it so that it's off-kilter, abnormal, noticeably (and sometimes shockingly) different.

Like many Jewish traditions, there is a simple answer to the Four Questions. At the surface, it's done to demonstrate to children that questions are always welcome. It's a way of inviting everyone at the table to take stock of what is happening and ask about anything unfamiliar. But it doesn't stop there. If you dig just a bit beneath that easy surface reasoning you'll find additional meaning that goes surprisingly deep.

In Yeshivah — a day-school system for Jewish children that combines secular and religious learning — the highest praise one can receive is, "Du fregst a gutte kashe," which translates as, "You ask a good question.”

This is proven out in a story told by Rabbi Abraham Twersky, a deeply religious psychiatrist. He says that when he was young, his teacher would relish challenges to his arguments. In his broken English, the teacher would say, “You right! You 100 prozent right!! Now, I show you where you wrong!”

The impact of this culture of questioning does not limit itself to religious thinking. Individuals who study in this system find that it extends to all areas of life, including the secular.

When asked why he became a scientist, Isidor I. Rabi, the Nobel laureate in physics, answered,

The lesson for us, as monitoring professionals, is twofold. First, we need to foster that same sense of curiosity, that same willingness to ask questions, even when we think the answers may be a long time in coming. We need to question our own assumptions. We need to relish the experience of asking so that it pushes us past the inertia of owning an answer, which is comfortable. And second, we need to find ways to invite questions from our colleagues, as well. Like the Seder, we may have to present information in a way that is shocking, noticeable, and engaging, so that people are pushed beyond their own inherent shyness (or even apathy) to ask, "What is THAT all about?”

The deeper message of the Passover seder speaks to the core nature of questions, and the responsibility of those who attempt to answer. "Be prepared,” it seems to say. "Questions can come from anywhere, about anything. Be willing to listen. Be willing to think before you speak. Be willing to say, 'I don't know, but let's find out!' You must also be willing to look past trite answers. Be ready to reconsider, and to defend your position with facts. Be prepared to switch, at a moment’s notice, from someone who answers, to someone who asks."

Once again, I believe that being exposed to this tradition of open honesty and curiosity is what makes the discipline of monitoring resonate for me.