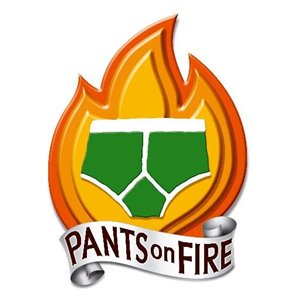 When someone brings up the topic of lies at work, most of the time people think of the big stuff, like embezzlement, falsifying data, or fudging fantasy football stats. But there's a whole other category of lying that happens all the time. Not only are these lies tolerated, but through some combination of repetition, vehemence, and mind control, employees of all stripes have come to believe them as true.

Part of the reason for this is that the lies are small (and therefore insidious). They often pass themselves off as sage advice or commonly-understood truisms. At worst, they may appear to be clichés or business tropes. Many are hard to argue with unless you've thought it through.

Nevertheless, they are lies, and especially in this era of #AlternateFacts, deserve to be exposed as such.

So take a look below and see which of these phrases match up with your personal experience or reality. If you have stories, reactions, or your own additions, let us know about them in the comments below!

No, it’s not. I perceive myself to be an AMAZING dancer. But 48 years of evidence (as well as testimony from my wife and children. ESPECIALLY my children!) indicate otherwise.

The truer statement is that perception is powerful, and can override facts. Knowing this is so does NOT mean we must kowtow to a requestor’s built-in perceptions or preconceived notions, but rather that we need to understand those perceptions and build compelling stories that bring the person to the actual truth.

“The customer is always right”

The truth is that customers can be, and often are, wrong. This can be due to the fact that they’ve been misled, or un- (or under-) informed, or one of a hundred other reasons why they are asking for the wrong thing, looking for the wrong solution. And then there’s the rare (but not rare enough) case when they are simply bat-guano crazy and want something stupid.

What am I supposed to think here? That I've been working stupider up until now? That I've willfully withheld a portion of my intellectual capacity? Or that I'm just phoning it in? Regardless of which inference you make, it's not a kind reflection on me, nor on what you think of my work product and work habits.

If you think I stink, or that I'm slacking off, or that I've gotten into a behavioral rut, then please just say it. If you think I'm overlooking something obvious, then say THAT. And if you don't think EITHER of those things, don't say this to fill the dead air.

“Think outside the box”

Like "work smarter, not harder," this one has the one-two punch of an insult AND the implication that I can’t solve a particular problem.

I list this as a lie because there IS no box. I may have fallen into a rut or a set of sub-optimal habits. I might be hyperfocused on a particular outcome or trajectory; I could just be lazy and unwilling to put in the extra effort that thinking about something differently might require.

Whatever the reason for my inability to find a novel solution is, it's not "a box." Calling it that doesn't get me any closer to changing my behavior OR solving the challenge.

Back in 2004, Bob Lewis translated this as "emaciated and unpleasant" (http://www.weblog.keepthejointrunning.com/?p=1886) and that has stuck with me. Lean is all well and good, as long as we mean "healthy" rather than "underfed.”

But "mean" (unless you mean "average,”which you probably don't) is a trait I would not find advantageous in the workplace. When would it be considered organizationally good to be rude, dismissive, short-tempered, or (to use Lewis' term) unpleasant?

Rather, we should strive for our teams and organizations to be healthy, focused, and determined. You can even throw in “hungry” if you want, as long as it’s not due to a lack of sustenance (i.e., resources).

In my experience, this is a statement that comes in three month cycles. Just keep working on-call for a little longer. Just keep putting in the extra hours. Just deal with this (last) fire drill.

Just put up with this sub-optimal situation.

After two years of ongoing struggle where the answer was routinely, "This is only going to be until the end of quarter,” I finally confronted a manager about how the situation hadn't gotten better. The situation may have changed, but the workload, sense of crisis, etc. had not improved. His response was surprisingly transparent, "Oh, I didn't mean it would get better. I just meant that it would change."

A company, department, or team that has gotten into the habit of trying to wait out bad situations is one that has given up on solving problems. Just remember that.

If you find yourself on the receiving end of this particular lie, one response is to ask for specifics. Such as:

By using these questions, and then the logical follow-up responses along with copious documentation, you are asking management to commit to a set of goals and outcomes (this is a technique also known as “managing up”). It also gives you a fairly accurate barometer as to how hard you should be looking for a better situation.

No, it isn't. Most companies are too large to have the group dynamics of a family. A company lacks the long-term history, shared genealogy, etc. that create lasting bonds.

That's not to say that people working at a company can't feel a close friendship and camaraderie. But it's still not family.

Those who make this type of comment are typically trying to instill in you a sense of loyalty to them right before they ask you to do something that goes against your personal interests.

I know, I know, this is the name of a department. But the name of the group is a misnomer bordering on a trite falsehood. Almost all of the frustration I've ever had (or heard coworkers have) with HR stems from misunderstanding their core mission.

In my experience, HR exists for two primary reasons:

They are NOT a department designed to help the employee in any way, unless "help" intersects with one of the two areas above. Use them in the same way you would use the legal department. Because that's pretty much what they are an extension of.

I have a few issues with this. First, when I run my own company I can choose which customers I want to deal with. I do that by deciding how and where I market, which jobs I accept, and which I'm too busy to take on right now, and by setting a price for each job that reflects the level of effort and aggravation I expect to have while doing the work.

Equally, my customers can choose whether to hire me or the person down the street.

Within a company, NONE of those things are true. I can't say no to the accounting department, and they can't find someone ELSE in the company to provide the same set of services.

In addition, customers and vendors come and go. But Sarah in the mail room today will become Sarah the head of accounting tomorrow. So how I treat her today matters for the duration of our time at this company.

“The squeaky wheel gets the grease”

I learned long ago that this is SOMETIMES true. But more often, the more accurate phrase is "The squeaky wheel gets REPLACED!"

When, how, and to whom one squeaks is a lesson many of us learn by experience (meaning: doing it wrong) over time.

So, anyone who blithely tells you this probably wants one of the following outcomes, none of which will be good for YOU:

Brevity is wonderful when it pushes us to create simple elegance. But often it just causes us to stress more, talk faster, widen the margins, shrink the font, and try to jam more into less.

Effective storytelling is partially about knowing when your forum and format fit the story you want to tell. Otherwise, you end up babbling like a fool and ruining your chances of making a case later on.

Some issues, requests, and explanations are complicated and can't be reduced to a 30-second overview. If you run into someone who demands that all of your interactions, requests, etc. be put in that format, then they're not really listening anyway.

“That's not part of our corporate culture/DNA”

There's a famous story about five gorillas (you can read it here).

Phrases like, "that's now how we do things,” or "That's just how it's done here,” or "It's not part of our DNA,”  are all lies, and all fall under the heading of Not Invented Here (NIH). It is often code for, "I don't want to," or worse, "The thought of doing things that way scares me."

As stated earlier, companies are not family. They also aren't organisms and thus don't have DNA. If they have a culture, it is because the people who make up the company actively choose to propagate a set of habits or a particular perspective when doing business. And culture or no culture, a good idea is a good idea. People want to do well, want to succeed, want to get ahead.

How you respond to this lie depends largely on your stake in doing something differently, and your role in the company.

“If you hire good people, they won't require supervision”

That's great. Let's see if they file their expense forms correctly and on time.

People at all levels of the organizational chart require supervision. What they may not need is meddling middle managers.

The best supervisors are part janitor, part secretary, and part cheerleader. They keep things clean (meaning they ensure an unobstructed path for their staff to pursue work); they attend higher level meetings and report back the information honestly and transparently so that staff can take the actions that support the business goals; and they publicly recognize successes so that their team feels validated in their work.

Also, this is insulting in the same way that "work smarter" and "think outside the box" are. It's a form of managerial "negging" (https://en.wikipedia.org/wiki/Negging). It implies that if you DO need supervision, you are obviously not passionate enough about your work and may be the wrong person for the job.

“It's easier to ask forgiveness than permission”

Yes. And all planes are equipped to make a water landing. Well, at least once. Whether they can take off after that is just a minor detail, right?

In an unhealthy environment, people do things on the sly and hope they don't get caught. If they DO get caught,  it seems many believe throwing themselves on the mercy of the court is as good a strategy as any.

But in mature, professional, adult environments, asking for permission is always preferable and always easier for everyone.

“Failure is not an option”

Nope, in some situations (often ones where this lie is uttered), it's practically a sure thing!

There is no guaranteed success. There is no outcome that is 100% predictable. Some failures, once they are in motion, are unavoidable no matter how much planning was done beforehand, or how much staff are on hand during the failure to try to save it.

Not only is this statement a lie, it's also not particularly helpful advice.

My point is certainly not that everything, or even most things, said at work are a lie. What I AM saying is that some of these trite and overused clichés have reached the end of their useful period.

Or as Sam Goldwyn said, "Let's have some new clichés."

Ain't that the truth.