This weekend is TOWEL DAY! 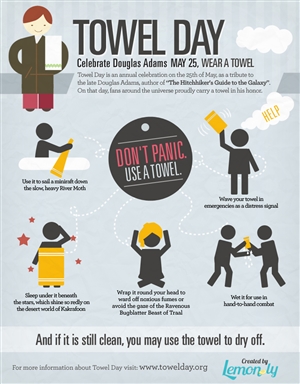 As I'm trying to explain Towel Day to the non-geek folks in my life, I'm struck yet again with how few people know about the brilliance of Douglas Adams. The conversations always seem to go something like this. "Seriously?! You've never heard of Hitchhiker's Guide? Hollywood even made that one into a (bad) movie?! I suppose that means you've never read Dirk Gently, Last Change to See, or seen the couple of Doctor Who episodes he wrote." /sigh. Blank stares and I change the subject.

Stephen Fry, another genius of our time, has said "He changed the way people spoke. You still hear some of his jokes from the Hitchhiker's books being told in pubs." If you are not an Adams fan, I will avoid waxing poetic about this awesome man and his work and simply tell you to go. Go pick up any of his works and you'll see why he's such a staple of a community that holds intelligence above all and isn't afraid of being a bit silly. Or just read Wikipedia http://en.wikipedia.org/wiki/Douglas_Adams. That's what Ford Perfect would probably do.

Towel Day was created as the ongoing celebration of the late Douglas Adams' (1952-2001) life and work. The first Towel Day was decreed exactly two weeks after Adams death on May 25th, as a day designated for an international celebration of his life.

The great man himself describes the usefulness of a towel:

"A towel, it says, is about the most massively useful thing an interstellar hitchhiker can have. Partly it has great practical value. You can wrap it around you for warmth as you bound across the cold moons of Jaglan Beta; you can lie on it on the brilliant marble-sanded beaches of Santraginus V, inhaling the heady sea vapours; you can sleep under it beneath the stars which shine so redly on the desert world of Kakrafoon; use it to sail a miniraft down the slow heavy River Moth; wet it for use in hand-to-hand-combat; wrap it round your head to ward off noxious fumes or avoid the gaze of the Ravenous Bugblatter Beast of Traal (such a mind-bogglingly stupid animal, it assumes that if you can't see it, it can't see you); you can wave your towel in emergencies as a distress signal, and of course dry yourself off with it if it still seems to be clean enough.

More importantly, a towel has immense psychological value. For some reason, if a strag (strag: non-hitch hiker) discovers that a hitchhiker has his towel with him, he will automatically assume that he is also in possession of a toothbrush, face flannel, soap, tin of biscuits, flask, compass, map, ball of string, gnat spray, wet weather gear, space suit etc., etc. Furthermore, the strag will then happily lend the hitch hiker any of these or a dozen other items that the hitch hiker might accidentally have "lost." What the strag will think is that any man who can hitch the length and breadth of the galaxy, rough it, slum it, struggle against terrible odds, win through, and still knows where his towel is, is clearly a man to be reckoned with.

— Douglas Adams, The Hitchhiker's Guide to the Galaxy

I invite you to pop on over to http://www.towelday.org/ and maybe take in an event. Or maybe just snuggle up with your favorite towel and a good book.

How will you be celebrating Towel Day? Have pictures? Post them below!