"Oh Geez," exclaimed the guy who sits 2 desks from me, "that thing is ancient! Why would they give him that?"

Taking the bait, I popped my head over the wall and asked "what is?"

He showed me a text message, sent to him from a buddy—an engineer (EE, actually) who worked for an oil company. My co-worker’s iPhone 6 displayed an image of a laptop we could only describe as “vintage”: 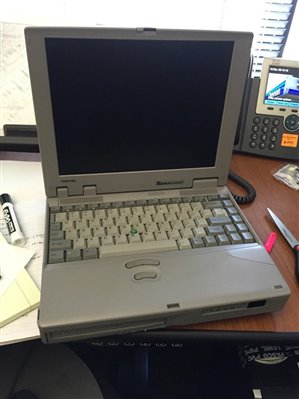 "Wow." I said. "Those were amazing. I worked on a ton of those. They were serious workhorses—you could practically drop one from a 4 story building and it would still work. I wanted one like nobody's business, but I could never afford it."

"OK, back in the day I'm sure they were great," said my 20-something coworker dismissively. "But what the hell is he going to do with it NOW? Can it even run an OS anymore?"

I realized he was coming from a particular frame of reference that is common to all of us in I.T. Newer is better. Period. With few exceptions (COUGH-Windows M.E.-COUGH), the latest version of something—be it hardware or software—is always a step up from what came before.

While true, it leads to a frame of mind that is patently un-true: a belief that what is old is also irrelevant. Especially for I.T. Professionals, it’s a dangerous line of thought that almost always leads to un-necessary mistakes and avoidable failures.

In fact, ask any I.T. pro who’s been at it for a decade, and you'll hear story after story:

And in fact, that's why my co-worker's buddy was handed one of those venerable Tecra laptops. It had a standard serial port and it was preloaded with the vendor's DOS-based ladder-logic programming utility. Nobody expected it to run Windows 10, but it fulfilled a role that modern hardware simply couldn't have done.

It's an interesting story, but you have to ask: aside from some interesting anecdotes and a few bizarre use-cases, does this have any relevance to our work day-today?

We live in a world where servers, storage, and now the network is rushing toward a quantum singularity of virtualization.

And the “old-timers” in the mainframe team are laughing their butts off as they watch us run in circles, inventing new words to describe techniques they learned at the beginning of their career; making mistakes they solved decades ago; and (worst of all) dismissing everything they know as utterly irrelevant.

Think I’m exaggerating? SAN and NAS look suspiciously like DASD, just on faster hardware. Services like Azure and AWS, for all their glitz and automation, aren't as far from rented time on a mainframe as we'd like to imagine. And when my company replaces my laptop with a fancy "appliance" that connects to Citrix VDI session, it reminds me of nothing as much as the VAX terminals I supported back in the day.

My point isn't that I’m a techno-Ecclesiastes shouting "there is nothing new under the sun!" Or some I.T. hipster who was into the cloud before it was cool. My point is that it behooves us to remember that everything we do, and every technology we use, had its origins in something much older than 20 minutes ago.

If we take the time to understand that foundational technology we have the chance to avoid past mis-steps, leverage undocumented efficiencies built into the core of the tools, and build on ideas elegant enough to have withstood the test of time.

Got your own "vintage" story, or long-ago-learned tidbit that is still true today? Share it in the comments!