It's time for another edition of Leon's Log, where either I preview a trip I'm about to take, or summarize one I've just been on. My goal is to help those whose budgets don't allow them to attend these conventions to get at least a few insights into what was shown; and for those who are considering going, get a window into the value of the event.

Taking a break from Berlin (where it's been held the last two years), CiscoLive Europe (or #CLEUR, as you'll see it mentioned on Twitter and elsewhere) will be in Barcelona, Spain this year, running from Sunday (yes Sunday) 1/28 through Friday 2/2.

Barcelona in February is hardly an oasis, but staring out my office window at the snow-covered streets of Cleveland (Jenne Barbour now insists I live on Hoth), the average Spanish weather of 5°-14°C  (about 41° - 57° F) is definitely a step in the right direction!

I mentioned the convention opens on Sunday this year, with a dedicated set of  DevNetExpress classes (https://devnetevents.cisco.com/event/DevNet-Express-Barcelona-DCI-Jan-2018). My travel plans don't allow me to make it for that, and I'm definitely going to miss it. Despite that, I am hoping to hit at least one programming session because everyone looks like they're having so much fun every time I go into the DevNet Zone.

One of the things I've been lax about keeping up to date with are Cisco's SDA and SD-WAN strategies. I feel like this is the year I should hit some of the sessions on this. I've even been invited to swing by the dCloud booth, crash on the dCloud couch, and get a demo of DNA Center and Viptela. 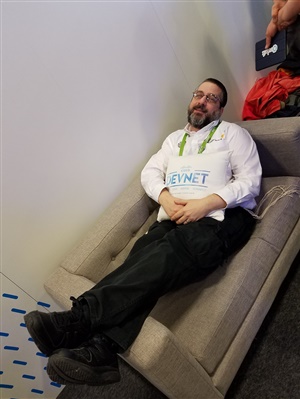 Another thing I'm looking at are the keynotes and showcases, to see if I can suss out any major themes.

I'm pretty sure there are some underlying messages, right?

While I know I said this last time I'm looking forward to finally FINALLY getting NetVet status this year. I've gotten my email asking to confirm my past attendance, so I'm keeping my fingers crossed that this is my year to get the coveted red ribbon.

I'm going to miss seeing my long-time convention buddy Roddie Hasan (@eiddor), but he had to skip out on this event. Not to worry, we already have plans to catch up at CiscoLive US in Orlando in June.

AND OF COURSE, going to Spain means I have a chance to sample the culture and cuisine. While traditional paella and tapas may not be on my #kosher menu, there are a few restaurants in the city that have options, and I'm planning to share pictures of everything I can sink my teeth into.

Finally, I'm doing something fairly unique for these kinds of trips: You see, my wife was born in Seville while my father-in-law served in the air force. So this is a chance for me to bring her "home" and visit the first house where she laid her head at night. While we're at it, we'll try to take in as much of the country as time will permit.

If you are planning to attend CLEUR, please drop me a line and plan to stop by booth WEP 1A to say hi, talk monitoring, and of course grab some of the usual slate of convention goodies.