Resources
Geek Speak IT Trends for 2016 – Containers, Clouds, and Flash, oh my!

cxi over 4 years ago

Wow, can you believe it? 2016 is almost over, the holidays are here I didn’t even get you anything!   It’s been a bit of a wild rollercoaster of a year through consolidation, commoditization, and collaboration!

I’m sure you have some absolute favorite trends or notable things which have occurred here throughout 2016.  Here are some that in particular have been a pretty recurring trend throughout the year.

Alright so that’s some of the rollercoaster at least a small snapshot of it, and the impact those decisions will have on practitioners like you and I only time will tell (I promise some of those will be GREAT and some of those, not so much!)

But what else, what else?! Some items I’ve very recently discussed include.

All three of these net-net benefit in the end really means that we will continue to see better technology, with deeper investment and ultimately (potentially) lower costs!

On the subject of Flash though if you haven’t been tracking the Density profiles have been insane this year alone and that trend is only continuing with further adoption and better price economics with technology like NVMe.  I particularly love this image as it reflects the shrinking footprint of the data center while reflecting our inevitable need for more. 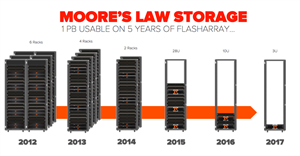 This is hardly everything that happened in 2016 but these are particular items which are close to my heart and respectively my infrastructure.   I will give a hearty congratulation to this being the 16th official “year of vdi” a title we continue to grant it yet continues to fail to fulfill on its promises.

Though with 2016 closing quickly on our heels there are a few areas you’ll want to be on the watch for in 2017!

But enough about me and my predictions, what were some of your favorite and notable trends of 2016 and what are you looking to see coming forward looking to 2017?

And if I don’t get a chance to… Happy Holidays and a Happy New Year to ya’ll!