In Honor of Stanley Martin Lieber 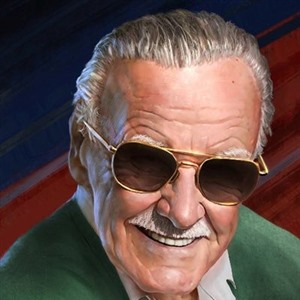 Known to most of the world as "Stan Lee"

When we first moved into the Orthodox Jewish world, we were invited to a lot of people's houses for a lot of meals. The community is very tight-knit, and everyone wants to meet new neighbors as soon as they arrive, and so it was something that just happened. Being new – both to the community and to orthodox Judaism in general – I noticed things others might have glossed over. Finally, at the third family’s home, I couldn't contain my curiosity. I asked if everyone we had visited so far were related. No, came the reply, why would I think that? Because, I explained, everyone had the same picture of the same grandfatherly man up on the wall: 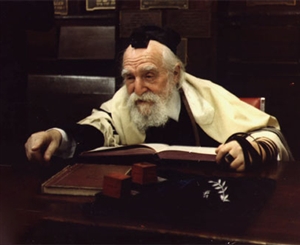 Our hosts were now equal parts confused and amused. "That's Rabbi Moshe Feinstein," they explained. "He's not our grandfather. He's not the related to anyone in the community, as far as we know."

"Then why on earth," I demanded, "is his picture on the walls of so many people's houses around here?"

The answer was simple, but it didn't make sense to me, at least at the time. People put up pictures of great Rabbis, I was told, because they represent who they aspire to become. By keeping their images visibly present in the home, they hoped to remind themselves of some aspect of their values, their ethics, their lives.

Several years later I was teaching a class of orthodox Jewish twenty-somethings about the world of IT. They were learning about everything from hardware to servers to networking to coding, but I also wanted to ensure they learned about the culture of IT. It started off as well as I'd hoped. When I got to sci-fi in general and comic books specifically, I held up a picture: 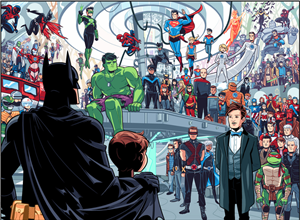 Image source: You'll Be Safe Here from Something Terrible, by Dean Trippe

"Can you identify anyone in this picture?" I asked.

Their responses were especially vehement. "Narishkeit" (foolishness) said one guy. "Bittel Torah" (sinful waste of time) pronounced another. And so on.

Now that they could tell I was serious, the dismissiveness was gone. "But not only that," I continued. "Each character in this picture represents a lesson. A value. A set of ethics. That big green dude? He taught me about what happens when we don't acknowledge our anger. That man with the bow tie? I learned how pure the joy of curiosity could be. And the big blue guy with the red cape? He showed me that it was OK to tone down aspects of myself in some situations, and to let them fly free in others."

Then I explained my confusion about the Rabbis on the wall, and how this was very much the same thing, especially for a lot of people working in tech today. And to call it narishkeit was as crude and insulting as it would be to say it was stupid to put up a picture of Rabbi Moshe Feinstein when you're not even related to him.

Then I explained where the picture came from. How author Dean Trippe came to write "Something Terrible" in the first place. At this point, my class might not have understood every nuance of what comic books were all about, but they knew it held a deeper significance than they thought.

Going back to the picture, I asked, "This picture has a name. Do you know what it's called?"

That, I explained, was what comic books meant to me – and to so many of us.

That’s the world that Mr. Lieber – or Stan Lee, as so many knew him – helped create. That’s the lifeline he forged out of ideas and dreams and pulp and ink. That lifeline meant everything to a lot of us.

Ashley McNamara may have put it best: "I repeated 1st grade because I spent that whole year locked in the restroom. The only thing I had were comics. They were an escape from my reality. It was the only thing I had to look forward to and if not for Stan Lee and others I wouldn’t have made it." 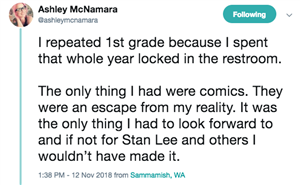 The truth is that "Stan Lee" saved more people than all of his costumed creations combined.

And for a lot of people, that's the story. Stan Lee, the man-myth, who helped create a comic empire and was personally responsible for the likes of Spiderman, Captain America, the X-Men, the Black Panther, and so on.

But for me there's just a little bit more. For a Jewish kid in the middle of a Midwest suburban landscape, Mr. Lieber had one more comic-worthy twist of fate. You see he, along with his cohort – Will Eisner, Joe Simon, Jack Kirby (Jacob Kurtzberg), Jerry Siegel, Joe Shuster, and Bob Kane (Kahn) – they didn't just SAY they were Jewish. They wove their Jewishness into the fabric of what they created. It obviously wasn't overt – none of the comics were called "Amazing Tales of Moses and his Staff of God!" Nor were Jewish themes subversively inserted. It just... was.

Comics told stories which were at once fantastical and familiar to me: a baby put in a basket (I mean rocket ship) and sent to sail across the river (I mean galaxy) to be raised by Pharaoh (I mean Ma and Pa Kent). Or a scrawny, bookish kid from Brooklyn who gets strong and the first thing he does is punch Hitler in the face.

And underlying it all was another Jewish concept: “tikkun olam”. Literally, this phrase means “fixing the world” and if I left it at that, you might understand some of its meaning. But on a deeper level, the concept of tikkun olam means to repair the brokenness of the world by finding and revealing sparks of the Divine which infuse everything. When you help another person – and because of your help they are able to rise above their challenges and become their best selves – you’ve performed tikkun olam. When you take a mundane object and use it for a purpose which creates more good in the world, you have revealed the holy purpose for that object being created in the first place, which is tikkun olam.

When you look at the weird, exotic, fantastical details of comic books – from hammers and shields and lassos and rings to teenagers who discover what comes with great power; and outcast mutants who save the world which rejects them; and aliens who hide behind mild-mannered facades; and Amazonians who turn away from beautiful islands to run toward danger – when you look at all of that, and you don’t see the idea of tikkun olam at play, well, you’re just not paying attention.

Stanley Lieber showed the world (and me) how to create something awesome, incredible, amazing, great, mighty, and fantastic but which could, for all its grandeur, still remain true to the core values that it started with. In fact, in one of his "Stan's Soapbox" responses, he addressed this:

“From time to time we receive letters from readers who wonder why there’s so much moralizing in our mags. They take great pains to point out that comics are supposed to be escapist reading, and nothing more. But somehow, I can’t see it that way. It seems to me that a story without a message, however subliminal, is like a man without a soul. In fact, even the most escapist literature of all – old time fairy tales and heroic legends – contained moral and philosophical points of view. At every college campus where I may speak there’s as much discussion of war and peace, civil rights, and the so-called youth rebellion as there is of our Marvel mags per se. None of us lives in a vacuum – none of us is untouched by the everyday events about us – events which shape our stories just as they shape our lives. Sure our tales can be called escapist – but just because something’s for fun, doesn’t mean we have to blanket our brains while we read it! Excelsior!”

(May his memory be for a blessing)