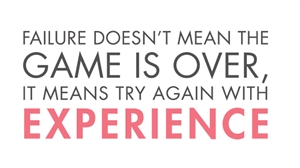 Recently a coworker was giving a talk and he just froze up. When I asked him about it later, he said, "What happened yesterday has never happened before. It was like my throat clenched up and I couldn’t get words out. It psyched me out."

For just a moment, I'd like you to think about a time you failed. Like, REALLY failed. I don't mean a small "I took the wrong exit on the highway" goofs. Or the "I forgot my Mom's birthday" mess ups. I'm also not talking about a time you were part of an organizational or team failure where you look back and think, "Why didn't I speak up? Why didn't I step up?"

I'm also not talking about failures which were embarrassing, but in retrospect sweet and kind of normal. Like the time a certain freshman asked out the homecoming queen to prom. (Yes, I did. No, she didn't accept, but she was nice about it. Everyone else in the hall by the quad where I decided to ask her? Not so much.). Nope. I want you to think about a moment when you really really blew it. Dropped the ball. Failed to deliver.

Now, as you sit there, possibly wallowing in uncomfortable feelings (and maybe even feeling resentful that I brought it up), I'd like to suggest that you understand something really important:

It happens to everyone.

As evidence, I'd like to present a few case studies, including the one with my coworker.

In my senior year of college, I heard about an off-Broadway production of "Sweeney Todd" that was being produced by some folks I'd worked with previously.

That sentence deserves to be un-wound for those who aren't familiar with the New York theater scene.

2) "Being produced by some folks I'd worked with previously" means I had a potential leg-up in the audition process. Getting cast wasn't a sure thing, but an in is an in.

3) "Sweeney Todd" was (and still is) my all-time favorite production.

Given my age and vocal range, I would be auditioning for Toby, my all-time favorite part who sings my all-time favorite song ("Not While I'm Around") in my all-time favorite play. I planned, I prepared, I rehearsed. As a senior in a large theater program, I had all the tools I needed—coaches, head shots, the works. I showed up for the audition. I knew two out of the four people in the room. We made some small talk. They asked if I was ready. The piano started.

I missed my entrance.

No biggie, everyone said. It happens. The pianist started over.

I missed it again. And again. The pianist tried to mouth the words to help me. No dice.

Confidence plummeting, panic rising, it was like I was underwater. I couldn't hear the notes any more. Couldn't find my voice.

I muttered an apology and got out of there as fast as I could. As I walked down the street I tried to wrap my head around what happened. There was no sugarcoating it, no handy excuses. I had bombed what should have been a sure thing. Instead of a home run, I had struck out on a slow-mo’, underhand toss, softball pitch.

Wallowing in my sense of defeat and embarrassment, the only thing I had to fall back on was a story my Dad had told me.

This is a story about my Dad, Joseph Adato. THE Joseph Adato. Which sounds funny until you realize he's kind of a big deal in classical music circles (for examples, start with this book.​ And this one.)

He started playing drums at 10. At 18, he was playing in New York Philharmonic and the NBC Symphony of the Air on an as-needed basis. So then one day he gets called up to the big leagues. There was a full-time opening in the New York Philharmonic percussion section. Slam dunk, right? He shows up, music under his arm. Everything is set. His long-time teacher and a few other orchestra members are sitting there. All faces he knows.

When he told me the story, he said, "It might as well have been bugs on the page. I had NO IDEA what I was looking at."

He knew the music. He probably could have played it from memory if he thought about it. But he honestly could not tell what he was looking at. He apologized, walked off, and went home.

Back in the 80s, I had the pleasure of seeing Lily Tomlin perform her one-woman show "The Search for Signs of Intelligent Life in the Universe." The show itself was amazing, but at the very start, something incredible happened that changed the way I looked at "failure" from that point forward.

Ms. Tomlin came out on stage and began her monologue. And then, mid-sentence, she stopped. Took a deep breath. Said (mostly to herself), "umm...."

It was clear she was off, that something wasn't clicking for her. And what she did next stuck with me. She looked out at the audience. Not the way people look when they are performing—kind of a hazy "stare at the back wall" kind of way. She looked around at the people sitting in the audience. She acknowledged them.

At that moment, even as a theater student, I had no idea what would happen next. But I knew it wouldn't be any of the cliched responses you see or hear about—­people freezing, running into the wings in tears, covering their face in their hands, etc.

Ms. Tomlin just stood there, smiling, taking us all in. Then she said, "I know this is going to sound funny, but this is a little overwhelming for me today. Do you mind if I just grab a glass of water for a second?"  Someone from the wings came on and handed her a bottle of water and she walked to the front of the stage, sat on the edge, and made small talk. With us. She asked about the weather outside, how traffic was getting to the theater, that kind of thing. Then about three minutes later, she said, "Okay, I think I'm good. Thank you," and she got up. She said, "Let's get this thing started," and she launched into her opening monologue.

With my two failure stories (mine and my Dad's) under my belt, I thought long and hard about what I'd just witnessed. Here's what I learned.

First, if you are overwhelmed, or scared, or confused, own it. Don't try to shove it under an emotional rug because the result is that ALL of your emotions become inaccessible. Even if you are giving a quarterly report, you need to be fully present as a human being or bad things start to happen.

We're all like that. We watch someone up there giving a talk and we want them to be brilliant, to teach us, to make us laugh. And when they misstep, we don't immediately write them off. We think, "Come ON! You can DO it!"

So when YOU go up there, remember that is what is in everyone's mind. Every single person in that audience is silently hoping that you will be incredible. They are cheering you on. The applause has started before you say your first word.

If you keep that in mind, A LOT of the jitters go away. It becomes clear, and even urgent, that you work through any challenges, whether they last a moment, an hour, or a week.

All of this­—my experience and my Dad’s and Lily Tomlin’s—was a large part of the conversation I had with my coworker as we talked through it. Let's be clear, his freezing up wasn't the end of his life or his career. It wasn't even the worst part of his week. (Hey, we all have weeks like that, right?) I told him, "So yesterday happened, but ‘yesterday’ has happened to everyone. Dad. Adele, Elvis. Pavarotti. All of them. You're in good company."

He said, "I hate to rejoice in your story of epic failure, but it's comforting to know I'm not alone."

I replied, "You aren't. You're rejoicing in the normalcy of it, in the reassuring consistency of the human condition and experience."

But the next time he got up to speak, it was clear he was approaching things differently. No, he didn't stop in the middle and say, "This is really overwhelming." He didn't need to. He was on top of it. But sometimes that's the point. If he did need it, the trick was there for him to use.

Sometimes, just knowing we have a tool in our back pocket makes the difference between success and failure.