Resources
Geek Speak Everything I Needed To Know About A Career In I.T.

Everything I Needed To Know About A Career In I.T. 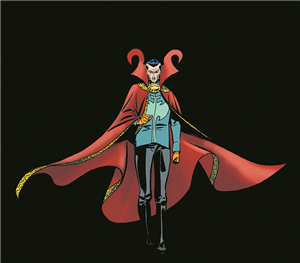 I found myself in that situation recently, as I sat watching Dr. Strange, the latest installment in the Marvel cinematic universe.

There, hidden among the special effects, panoramic vistas, and Benedict Cumberbatch's cheekbones were some very real and meaningful IT career lessons, applicable to both acolytes and masters as they walk the halls of your own technological Kamar Taj. In fact, I discovered a series of lessons, more than I can fit into just one essay.

So, over the next couple of installments I'm going to share them with you, and I’d like to hear your thoughts and reactions in the comments below.

If it needs to be said, there are many spoilers in what follows. If you haven't seen the movie yet, and don't want to know what's coming, bookmark this page to enjoy later.

Know the essential tools of the trade

The movie introduces us to the concept of a sling ring, a magical device that allows a sorcerer to open a portal to another location. In the narrative arc of the movie, this appears to be one of the first and most basic skills sorcerers are taught. It was also the key to many of the plot twists and a few sight gags in the movie. In my mind, I equated the concept of the sling ring with the idea that all IT pros need to understand and master basic skills, such as IP subnetting, command line syntax, coding skills, and security.

Can you be a solid IT pro without these skills? Sure, but you'll never be a master, and odds are good that you'll find yourself hanging around the lower end of the career ladder far longer than you’d like.

Think creatively about how to use the technology you already have

In the movie, immediately after figuring out how to use a sling ring, we see the hero use it in non-standard ways. Instead of opening a portal for his whole body, he opens holes just big enough for his hands, so that he can borrow books from the library and avoid being detected by Wong the librarian. We see this again in the use of the Eye of Agamotto during Doctor Strange's face-off against Dormamu.

The great thing about essential IT skills is that they can be used in so many ways. Understanding network routing will allow you to build stronger and more secure environments in the cloud. A grasp of regular expressions will help you in coding, in using various tools, and more. Understanding the command line, rather than being trapped in the GUI all the time, allows you to automate tasks, perform actions more quickly, and extend functionality.

It's worth noting that here at SolarWinds we place great stock in enabling our users to think outside the box. We even have a SolarWinds User Group (SWUG) session on doing just that – called “Thinking Outside the Box”.

Don't let your desire for structure consume you

In the movie, Mordo began as an ally, and even friend, of Stephen Strange, but displayed certain issues throughout the movie. In claiming he had conquered his demons, the Ancient One replied, "We never lose our demons. We only learn to live above them."

Mordo’s desire to both protect the natural order and remain steadfastly within its boundaries proved his undoing, with him leaving the sorcerers of Kamar Taj when he found that both the Ancient One and Doctor Strange had bent rules in order to save the world.

I find this relevant when I see seasoned IT pros forcing themselves to operate within constraints that don't exist, except in their own minds. When I hear IT pros proclaim that they would never run (name your operating system, software package, or hardware platform) in their shop, it's usually not for any sound business reason. And when those standards are challenged, I have watched more than a few seasoned veterans break rather than bend. It's not pretty, and it's also not necessary.

There are never too many sorcerers in the world

Mordo's reaction is extreme. He begins hunting down other practitioners of the magical arts and taking their power, proclaiming, "There are too many sorcerers in the world!"

There are times in IT when it feels like EVERYONE is trying to become a (again, fill in your technology or specialty here) expert. And it's true that when a whole crop of new folks come into a discipline, it can be tiresome watching the same mistakes being made, or having to explain the same concepts over and over.

But the truth is that there are never enough sorcerers, or in our case, specialists, in the world. There's plenty of work to go around. And the truth is that not everyone is cut out for some of these specialties, and they soon find themselves overwhelmed and leave – hopefully to find an area of IT that suits them better.

While I don't expect that anyone reading this will magically extract the IT power from their peers, I have watched coworkers shoot down or even sabotage the work of others just so they can maintain their own privileged status. I'm happy to say that this tactic rarely works, and never ends well.

At one point in the movie, the Ancient One sends Strange on a trip through alternate dimensions, then asks, "Have you seen that at a gift shop?" When Strange begs her to teach him, her response is a firm “no.” Hours later, Strange is wailing at the door, begging to be let in.

At some point in your career, you may have an epiphany and realize that your career goals point you toward a certain technology or discipline. And, just your luck, there's a team that specializes in exactly that! So you go to the manager or team lead and ask if you can join up.

Your first request to join the team may fall on deaf ears. And your second. You may need to hang, like a sad puppy dog, around them in the lunchroom or around the water cooler for a while. Unlike Doctor Strange, it may take weeks or even months of persistence, rather than a few hours. But that doesn't mean it's not worth it.

Did you find your own lesson when watching the movie? Discuss it with me in the comments below. And keep an eye out for parts 2-4, coming in the following weeks.

The series is a general interest piece and not related to SolarWinds products in any way, nor will it be used to promote Solarwinds products.
It will be hosted on THWACK.com, the free, open user community for monitoring experts.
Can you