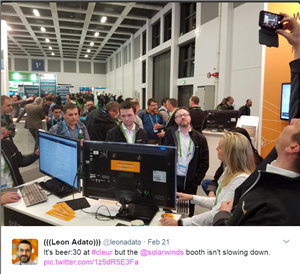 When I head out to conventions, especially the bigger ones like Cisco Live, I always expect to find some darling technology that has captured imaginations and become the newest entry in every booth denizen's buzzword bingo word list. And most of the time, my expectation is grounded in experience. From SDN to IoT, and on through cloud, container, and BaaS Blah Blah as a Service (BaaS), each trend is heralded with great fanfare, touted with much gusto, and explained with significant confusion or equivocation.

Chalk it up to the influence of Berlin's tasty beer and solid work ethic if you want, but this year the crowd was clearly interested in "the work of the work," as I like to call it, or "less hat, more cattle," as my friends in Austin might phrase it.

Don't get me wrong. The sessions were engaging as ever. The vendor floor was packed. The attendees came early and stayed each day to the end. The DevNet area was bigger than ever before. It was, by every measure, a great conference.

More about DevNet: While there were a lot of younger faces, there was no shortage of folks who clearly had put their years in. Patrick was the first to notice it, and it's worth highlighting. Folks with depth skills in a technical area were taking time to begin training on the "new thing," a set of skills that are up-and-coming, which do not match, in any way, the techniques they use right now, which may not even bear a resemblance to their current job. But they were there, session after session, soaking it in and enjoying it.

But as I commented to patrick.hubbard and ding, I hadn't yet found "it." And they both pointed out that sometimes the "it" is simply thousands of people spending time and money to come together and share knowledge, build connections, and enjoy the company of others who know what they know and do what they do.

Meanwhile, a steady stream of visitors came to the SolarWinds booth asking detailed questions and waiting for answers. Sometimes they had several questions. Often, they wanted to see demos on more than one product. They ooh'ed and ah'ed over our new showstoppers like NetPath and PerfStack (more on those in a minute), but stuck around to dig into IPAM, VNQM, LEM, and the rest.

After speaking to someone for a few minutes, visitors were less apt to say, "Can I have my T-shirt now?" and more likely to say, "I would also like to see how you can do ______." For a company that staffs its trade show booths with an "engineers-only" sensibility, it was deeply rewarding.

But there was no "trendy" thing people came asking about. There simply was no buzz at this show.

Unless - and I'm just throwing it out there - it was US.

You see, about a month before Cisco Live, SolarWinds was identified as the global market share leader for network management software (read about it here: http://www.solarwinds.com/company/press-releases/solarwinds-recognized-as-market-leader-in-network-management-software). Now that's a pretty big deal for us back at the office, but would it matter to in-the-trenches IT pros?

They came to the booth asking about it. To be honest, it was a little weird. Granted, a kind of weird I could get used to, but still weird.

So it turns out that Cisco Live didn't feature a buzz-worthy technology, but instead we found out that we got to be the belle of the ball.