A Cautionary Toy... I Mean Tale 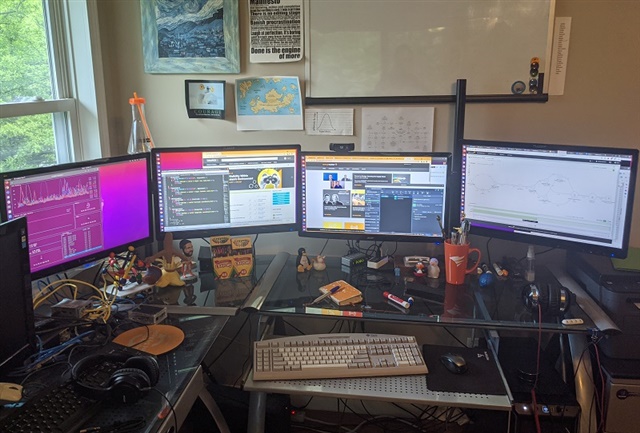 To say the landscape of my desk is “eclectic” would be both accurate and, in some ways, an understatement. Perhaps it’s a method of accommodating my attention-deficit behaviors (the four monitors certainly are), giving me a range of objects inside the visual field to keep me somewhat focused on the work on the screen. Maybe I merely like displaying mementos of past interactions, experiences, achievements, or insights. But in at least one case, the object serves as a cautionary reminder, an ever-present warning about the cost incurred by my natural tendency to “move fast and break things.” 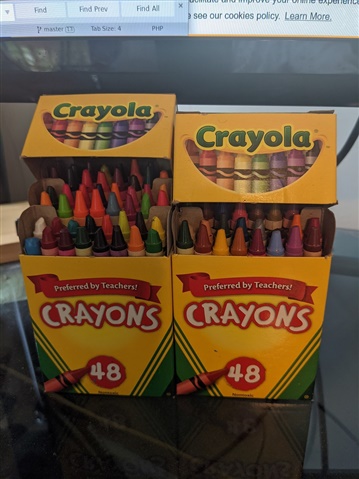 Is it the crayons? No, I got those after reading an essay by Robert Fulghum in “All I Really Need to Know I Learned in Kindergarten,” which said (in part), ”...every adult or child I give a new set of Crayola crayons to goes a little funny. [...] The adults always get the most wonderful kind of sheepish smile on their faces—a mixture of delight and nostalgia and silliness.” I read that and went right out and bought the biggest set I could find. Delight and nostalgia and silliness? That’s something I want on my desk, all the time. 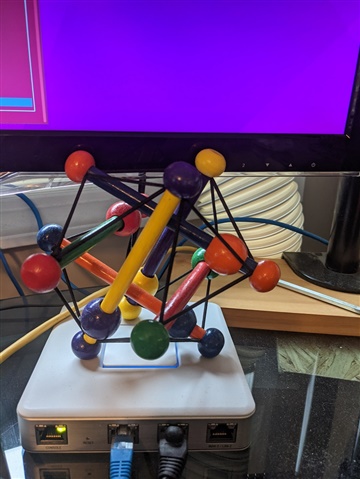 Maybe the weird squishy molecule thing? Nope, not that either. This was one of the first baby toys my wife and I ever bought. It kept my first child intrigued and occupied for hours. I have to admit it did the same for me, too. Ostensibly, it’s my daughter’s, but you can see who has it now. 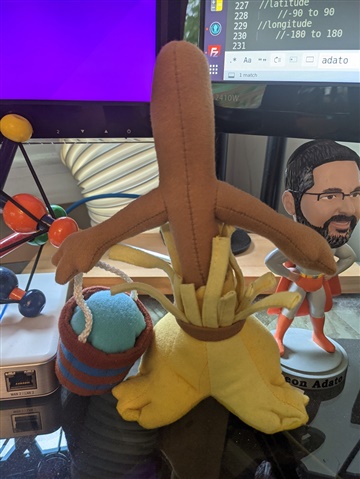 The object in question is the stuffed broom. It’s old; I probably picked it up in the early 90s or so. It used to hold two buckets, but my kids decided one was good enough during one of their preschool investigations of my office. As far as I can tell, Disney doesn’t make them anymore. They’re a callback to the movie “Fantasia,” specifically the sequence featuring Mickey Mouse in “The Sorcerer’s Apprentice.” (You’ve probably seen it, but in case: https://video.disney.com/watch/sorcerer-s-apprentice-fantasia-4ea9ebc01a74ea59a5867853)

You see, once I’d really found my IT sea legs, I did a spot of work I could legitimately call “coding.” While I didn’t fool myself into thinking I was an actual “programmer,” programming was nevertheless something I could DO (albeit with much trial and error). One day I was talking to Lawrence, one of my friends who was a “real” programmer at a local shipping company and complaining about how a script I’d wrote wouldn’t stop unless I hit <BREAK>. I admitted I didn’t think it was a big deal.

He stopped what he was doing and stared me dead in the eye like I’d just insulted his grandmother. “Sit. Down,” he said. I sat. He then proceeded to tell me about a “funny” moment he’d had not long before. In a flash of brilliance, he decided to have errors in his code output to the local printer, so he wouldn’t have to dig through obscure logs to trace issues. Of course, he completed his code on Friday afternoon and thought nothing more about it.

On Monday, he arrived back to his office to find 15 boxes of paper (the tractor-fed kind, because I’m old and this was the 90s). Fifteen boxes. Each and every one of them contained nothing but a cover page indicating Lawrence as the owner of the print job, another page with the sentence “Errors: 0” printed exactly one time, and an end page indicating the print job completed. Three mostly blank pages. Over and over again.

Finishing his tale, Lawrence told me, “Runaway processes always run somewhere, and sometimes they come back with annoying friends called ‘consequences.’ So maybe take a minute and go fix your code.”

The image of computer processes running hither and yon, causing unwanted and unanticipated havoc immediately conjured images of “The Sorcerer’s Apprentice.” As I began to delve into monitoring and my coding efforts became more focused on automation—both gathering information and responding/resolving problems after they were detected—the similarity to the little mouse in the pointed hat only intensified.

As I said at the start, I’m not a naturally careful person. I tend to have a “ready, FIRE!, aim” approach to problem solving. The broom stands in silent remonstration of this particularly insidious type of carelessness. It’s a visual representation of the risk we, as monitoring engineers, always need to keep our eye on. As it stands among the other knickknacks and mementos, it whispers to me,

“Along with delight and nostalgia and silliness, our desk should have a place for responsibility.”