We have an issue in our Orion environment where many of our ESX hosts don't get properly matched to the corresponding UCS blade they live on (you can see my recent questions/rant about that here).  Because of this, I've noticed some pretty big differences in the hardware health information available on the ESX Node Details screen between hosts that Orion has correlated to UCS blades and ones that it hasn't.

On a regular ESX host that is not correlated to a UCS blade in Orion, we get the Service Tag of the host and 5 categories of hardware health info (Power Supply, Temperature, Disk, Array, and Other).  But, on hosts that are correlated to a UCS blade, we no longer see the Service Tag of the host, and we only get three categories of hardware health (Temperature, Memory, and CPU), of which only one of them is the same category that we get on the non-matched ones, Temperature.  Even then, within Temperature we get very different data between the two.  On the non-matched version we get temp readings for all of the memory modules, the system board, and the CPU.  But on the matched version we only get one board temp reading and two CPU temp readings.

So my question is, why is there such a huge difference in the Hardware Health info when it's matched to a UCS blade?

In some ways we are getting more info and in some ways much less.  I get that for the hosts that are matched to a UCS blade some of the hardware health info is handled on the UCS details page (like memory temperatures for example), but I feel like we are still missing out on things like the Service Tag, the disk sensors, and the array sensors.  That info isn't recorded on the UCS chassis details pages either, so why is that not still reported on the ESX Node Details page when matched to a UCS device?

Here is an example between two hosts that both live on the same UCS chassis.  One is properly correlated to its UCS blade and the other isn't: 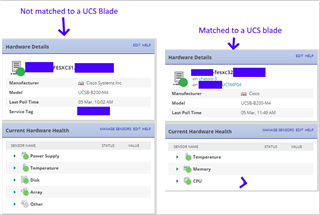