SPOLER WARNING: I am not, nor have I ever been, a developer.  This is a personal challenge and experience post.

One of the best ways to keep a record of alerts is to utilize the internal Orion event logger. It's probably the alert action I use most of all.  I like to use it for every alert and every escalation level.  I, personally, use it as an internal record of how an alert has progressed.

Quick scenario: Imagine an alert with one escalation after 15 minutes and a reset condition.

Up until yesterday I always thought of the Event Log as a one-way communication.  Something happens and you write a log.  Maybe you go back later to review the logs, but you never really "source" from them any other way.

But then I had to take a step back.  I can't know how everyone will use event details in their own environment, so I started to look at ways to tie the alerts back to the event log it wrote.

Because the Event Log isn't really designed to be used this way, I wasn't sure it was possible.  There's no out-of-the-box way to handle this, but I really wanted to look deeper in the way the data was stored and the schema of how it was related.

DISCLAIMER: This process has been tested with the Orion 2020.2 releases.  It may or may not work for other builds.

I knew that I had to start with the alert, so I opened SWQL Studio (part of the Orion SDK) and starting crawling around the Orion.Alert tables. 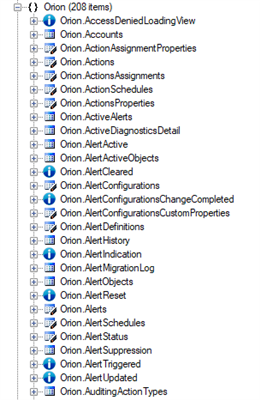 After looking through a few of them, I ended up on Orion.AlertActive.  This looks to be a list of all the current active alerts as opposed to Orion.AlertHistory, which appears to be historical.

Since alerts are triggered on a specific object that is being monitored, I needed to get that information as well.  I've got some details of the alert in general, but I still need the triggered alert.

After querying a few tables, I found what I wanted in the Orion.AlertObjects table.

Both tables have an AlertObjectID, so I knew I could join the two together.  I also saw that the Orion.AlertObjects table has the field EntityNetObjectId, which contains a way that we uniquely identify monitored elements in Orion, so I took note.

Last, but not least I needed to look at the Orion.Events table.

In the Orion.Events table I could see the NetObjectType and the NetObjectID.  If I put a colon between these two entries, it looks just like the EntityNetObjectId from the Orion.AlertObjects table.  So, let's add that to the output using the CONCAT function and remove the stuff from the SWQL query I don't need.  [Note: The CONCAT function just joins the elements provided by the parameters into one long string.  You can do a similar thing with the '+' operator, but I prefer the function.]

Well, that doesn't exactly look right.  It looks like the NetObjectType field is padded with spaces.  If they are spaces, then we should be able to replace them with nothing and get the result we want.  So, I tried again to see if my hunch was correct using the REPLACE function.

Much better.  Then it was just a matter of stringing my three tables together using some JOINs.  For the example below, I chose an arbitrary AlertObjectID to use for testing.

So it looks like we have everything we need to add any of these fields to an alert trigger.

I kept the original trigger action in place (Write to the NetPerfMon Event Log) and then created an escalation layer.  I created the escalation layer because I wanted to be 100% sure that the Orion.Events table would have the record when I went to query it.  I probably could have done this any time after the initial log write, but I'm being overly cautious.

For that second layer, you can use any type of action, because the important part is when you get to edit the message that's used.  In my example I used a log to a file because it was easy to test.

When you edit the message body (for an email, raising a ticket/incident, writing to a log file, sending a syslog/trap, or whatever else), you'll need to insert a custom variable. 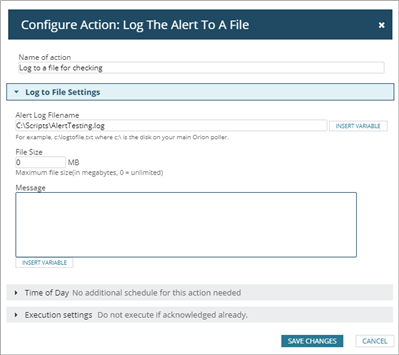 When you are in the body, click Insert Variable, check the box for Define SQL/SWQL Variable (Advanced), and move the radio button over to SWQL.

And this is the query I used.

There are two important parts here: the first is that I'm only returning one element (because all I want is the EventID) and the second is that thing at the end between the curly braces.  This is the unique identifier bound to this alert when it's fired.  (The equivalent to my earlier test with 2615420 as as arbitrary choice).

Paste the above in that Custom Variable box and you'll get just the EventID when the alert triggers.

And I know that this works because after I saved my new alert, this is what showed up in that flat log file:

There's also at least one caveat: if you have multiple messages being logged for a single alert, you may need to use TOP 1 and an ORDER BY clause in your SWQL to only get the most recent.  I've included an example of what I think that would look like in the attached document along with the original SWQL query.

So, I hope that you've enjoyed your journey with me on how I took a problem that I thought was impossible and turned it into that was, if not simple, definitely possible.  One thing I've always said, if Orion has the data, we can find a way to get the data.