This is apart of our long term plans which also include being able to edit inputs after submission.

Return to a previous step in a process

I have a process, which includes approvals, where if the approval is denied the ideal action would be to return to a previous step in the process to fix something, then re-submit for approval. Right now the only way to create this kind of flow is to recreate those steps in the denial phase of the approval, and then recreate them again, and again for as many times as you want this loop to happen.

Ideally, I would be able to have a step that returns to a previous step in the process, then has a counter of how many times I've returned. If that step runs more times than the max indicated by the use (say I was denied 3 times, or 5 times) then branch in a different direction. If I don't want to ever break out, set the max on the counter to 0, or -1, to indicate that there is no max breakout counter.

Below is a screenshot of my current process. (For context, this process is for creating a new software deployment.) Instead of having to loop through these steps multiple times, if denied I could just send a notification and return to the "Create and Test Install Process" step. Again, ideally I would have an optional max of how many times I would loop through before breaking out of the loop and following an alternate path. 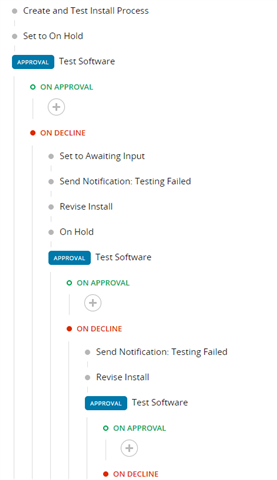 This could be useful for other things too, if a specific part of a process needs to be run multiple times for some reason.