I'm not sure if this is the right place to post this question but I'll give it a shot (And hopefully be corrected if this question belongs in another forum)!

We've recently begun to have a lot of Orion Alarms in our pipeline and usually I would check out the event viewer to figure out what have happened in the time period of the alarm, but I haven't been able to do so. What I've experienced on some of our servers (Using 'Agent' as polling method) is that there's an application called "SWJobEngineWorker2x64.exe" that has become "Unavailable" and then there seems to be a time period of about 12 min. where no logs in the application folder is to be found.

As you can see in the provided picture we usually get multiple logs within the same minute but for some reason there's a sudden stop in the logging after the beforementioned job has stopped(?).

The only thing I've been able to figure out from my googling is that this is a Solar winds job, which makes sense since they're using agent, but is this job the reason why we see the sudden stop in logs? Have anyone else experienced that same issue? 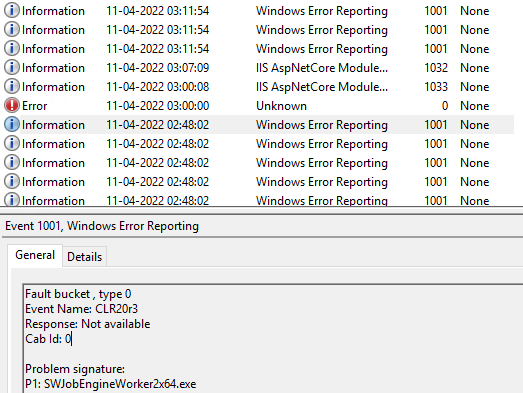