I am doing some analysis on the architecture for a new environment, and HA is a requirement.

Currently we have licensing for NCM, SAM, IPAM, NTA, NPM

We also have a license for a additional polling engine (APE)

I know we would need to purchase a license for HA.

Thought it would be worth mentioning:

The questions i have are:

Below are the two options...which one is correct?

Anything i have missed? 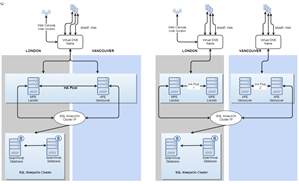