Network Performance Monitor (NPM)
Feature Requests Hardware sensors that are for an interface, should relate to that interface, not the node.
Open for Voting

Hardware sensors that are for an interface, should relate to that interface, not the node.

Currently Hardware sensors are only related to the Node, which is fine for some things like temperature and such.  However, for sensors that are directly related to an Interface, such as monitoring SFP's that support DOM for things like Tx/Rx power, temp, bias and such it needs to be associated with the interface and not the node.

Why you might ask?   The problem is that right now, if you have an SFP inserted in a port that is shut down, or just plain down because nothing is plugged in, the hardware sensors will ALWAYS be triggered resulting in bogus warnings.   That's because the sensor is associated with the node and the node is up.  It ignores the status of the interface!

Probably not an issue if you make sure you remove SFP's from all ports that aren't in use, but in practice that is rarely the cause.    Let's say you install a new SFP based switch and populate all the ports you know that your going to use over the next month or so.  The minute you start monitoring the switch, you will get critical alerts for all of those ports!

It just makes sense  that for those hardware components that are associate with an interface, that the alert be associated with it also.   That way, when the port is shut down, the software will disable the alert for you until it is active. 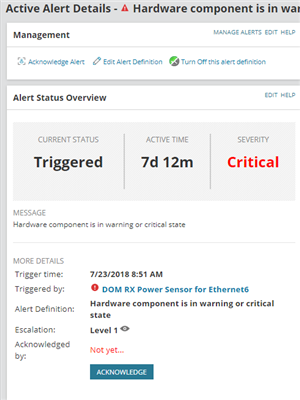 There have been lots of questions on this already, here are a few

Re: Health Sensor for a Ten Gig interface on a Cisco 4503E

Re: 10.4 hardware health monitoring - anybody know what a bias current sensor is?

Hardware health sensor is up on shutdown interface