It would be great if the VLAN poller package would poll the VLAN traffic and store it in its own NPM_VLAN_Traffic table so that we don't have to monitor every VLAN as an interface to get the traffic data to show up in the VLAN resources.  This would be amazing for gauging how much traffic is going over a VLAN per Interface, Node, or even all Interfaces/Nodes.  As it is now each and every VLAN interface on every switch/router would have to be monitored in NPM as an interface which adds a ton of administrative overhead for the user.  With my idea the individual VLAN interface traffic polling would require very little input from the user and make viewing, alerting, and reporting on all non-VLAN interfaces much easier to manage..

I learned something new and a little bit disappointing today.  I'd always wondered why the VLAN resources in NPM views never show me any VLAN traffic when I hover over them.  It just always says N/A.  So I started digging and discovered that there is no VLAN Traffic data stored in the database.  When you hover over a VLAN in the "List of All VLANs On Node" resource, a SWQL query is ran in the background that takes the VLAN interface index (IFIndex) and joins it to a matching Interface Index and NodeID in the Interface Traffic table and calculates the data that way.  This means if you aren't monitoring the VLAN as an Interface (which I almost never do because there are way too many of them) you will just get 'N/A'.  This kind of stinks.  All the VLAN poller package is doing is grabbing the VLAN Name and IFIndex on a node.  I understand why its not currently done.  Cisco (and maybe the MIBs from the other vendors that the Solarwinds VLAN Native Poller looks at) doesn't supply any traffic data in the CISCO-VTP-MIB.  Despite that, Solarwinds could easily customize it to poll the matching interface traffic data from the Interface traffic MIB on the device and correlate it before storing it in a VLAN database table in Orion.  Well, maybe not easily but for experienced developers such as themselves I'm sure they could figure it out.

Bonus Addon:   I think it would be cool if when you do a List Resources and select the VLAN poller, all of the VLAN Interfaces showed up underneath like below as well as gave you some options on how to handle it.  See my mockup here: 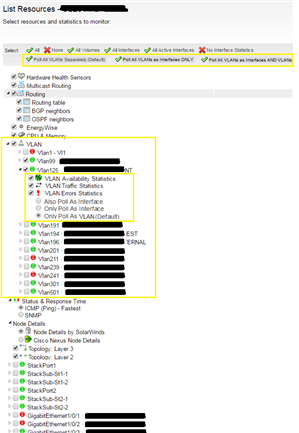