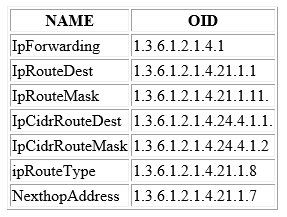 The problem I'm running into is the Nexus 7000 doesn't support the IpCidrRoute* OIDS, probably because they've been deprecated in favor of I believe the inetCidrRouteEntry OIDS (and maybe others) instead.   I'd like to see IPAM definitely support the newer OIDS and would love to see them still support the older OIDS too.   That way whatever you have will work!