Today, my friends, is December the 24th.

In Germany, this would be the evening where young kids start a raid at the Christmas tree, and grown-ups invite their parents for dinner. Or, in case of no kids available, you make sure your friends with paws are having a good time with fresh tuna: 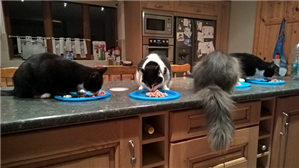 So, everyone is busy, and no one is reading this blog post!

But wait, surely some IT folks are working and minding those pesky servers because servers don’t know it’s Christmas!

And for some reason, I now have this song from the 80s in mind, but that’s fine as the task is to write about "what would I tell my younger self."

The lack of a time machine aside, let’s do it!

Twenty-something years ago, I wanted to become an architect, but, while looking into what I would need to study, I decided it's too much mathematics, which would require too much effort, so I ditched the idea early.

Instead, I told myself, "Okay, I am interested in art and computers," and started studying applied IT in computer media, hoping I could get away with this lazy approach and express myself through photography, video, and web design.

I guess you know what happened: math did strike back at the traditional IT topics and has followed me ever since. That includes random occasions, like exams asking for calculating variable subnet masks, ahhhhhh!

So, I am telling my younger self: Be adventurous, and try new things!

Now for the next thing, food.

If you’re following me on Twitter, you probably wouldn’t believe that, up until 2016, I primarily ate fast food.

Seriously, a long time ago I spent two years in Paris without learning much of the language besides “un menu Big Mac avec frites et coca,” and at home, I just used the microwave.

The only appliances in my kitchen were the microwave and a small fridge!

A little later, after I arrived in Ireland, I learned how to prepare precooked food. I learned to fry beef mince, added cream and a spice mix from a bag, and felt like a master chef.

Hey, it was at least an improvement!

It took me a few more years to start with serious cooking, which opened a new world to me.

So, I am telling my younger self: Be adventurous, and learn to cook earlier.

There is one more thing which just came into my mind.

For the majority of my life, I was living in a small city in Germany, and I never wanted to move elsewhere. Not even 60 kilometers south for a job—so I commuted each day instead, which turned out to be a nightmare.

In 2005, I had the chance to turn my hobby into my profession, and I moved to the big city, Paris, France, far away from home. The time I spent there was so-so, but I felt encouraged to relocate even farther away to Ireland a little later. An island, would you believe, and they drive on the wrong side of the road!

But so many things have happened. As I have lived in three different countries, I became much more open-minded and changed my views of the world, the people, and life in general. I am born German, but now consider myself European.

So, I am telling my younger self: Be adventurous, and explore the world.

Now let me introduce you to another nice German Christmas tradition, Glühwein (heated mulled wine with the addition of a sweet spirit like Amaretto). You would start drinking these at Christmas markets in late November: 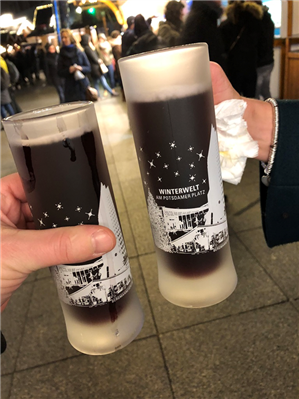