Just a simple query to show total counts for interfaces not polling, or not polling correctly. We had some issues, several years ago, with random interfaces which would simply stop collecting data, and this little widget ended up earning a spot on our main view to help us track down the problem. Since then, and because it only takes up a tiny bit of space, I decided to leave it there until something else more important comes along.

(Don't worry, my Orion environment isn't as bad as the screenshot would lead you to believe. I just tinkered with the query to get some data for the screenshot.) 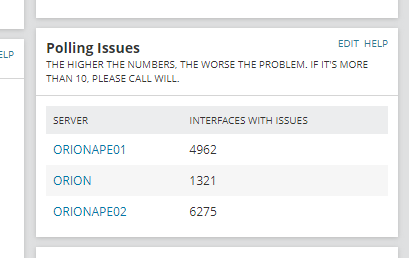 While I cannot remember where all the various pieces of this query originated, I do know it was from folks in this community, so I'll just credit THWACK. (Which is basically what I'll need to say for anything and everything I post...)